Assassination of a High School President(2008)

After much investigating, Bobby Funke (Reece Thompson) figures it all out.  Alex Schneider and the Mullen brothers had been selling Ritalin variants to students so they could study better. When the demand wasn’t enough, they broke into the school and changed answers on tests to make people fail so they would buy the drugs. Going further with the help of ringleader Marlon, they began stealing money from the school itself. Paul Moore, the school president figured out the embezzlement and threatened to expose them. In retaliation, they set him up to be the fall guy for the stolen SAT’s.

Bobby catches the gang doctoring the new SAT’s and blares their confession over the loudspeaker.  When Principal Kirkpatrick (Bruce Willis) comes to deal with the guilty parties, the final twist is revealed. Francesca (Mischa Barton) was in on the scam, and Marlon’s lover. She was the one who put the tests into Paul’s locker, and went as far as to seduce and pretend to like Bobby in order to throw him off the trail.  Francesca pleads with Bobby, but his editor Clara (Melonie Diaz) reminds him, “Forget it Funke, It’s High School.” Bobby walks away with Clara, vindicating Paul, and proving himself to be a competent journalist. 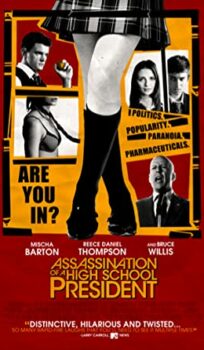