Callum Lynch witnessed his father murder his mother as a child. As an adult, he is set to be executed for murder, but he is taken by Abstergo Industries to have him be part of the Animus Project, in which he relives the memories of his ancestor, Aguilar de Nerha, who was part of a Brotherhood of Assassins.

Sophia Rikkin and her father Alan run Abstergo but are associated with the Knights of the Templar Order, who were the enemies of the Assassins. The Templars sought out the Apple of Eden for control over free will.

In the present, Callum learns that his father killed his mother after she willingly went through with it in order to avoid being part of Abstergo’s experiments. Callum takes on the role of an Assassin and leads a team of Abstergo captives against the modern day Templars, killing Alan Rikkin and taking back the Apple. 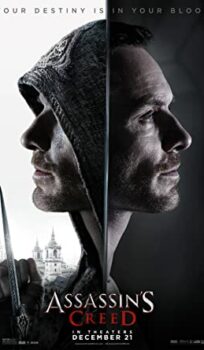