“The Lady”, the contractor with no face, is Nikolai (Anatoli Davydov), the hitman Robert (Sylvester Stallone) had supposedly killed 15 years earlier; however, he survived, and all this time had been pupetting both Robert and Miguel (Antonio Banderas), so they could end up killing each other.

They both kill Nikolai.  Then, when it seems they have made peace and will go part in separate ways, Miguel tries to shoot Robert in the back.  Elektra (Julianne Moore) gives Robert a mirror vision, and he shoots and kills Miguel by using his gun turned back through his vest.  Robert and Elektra survive and walk off together. 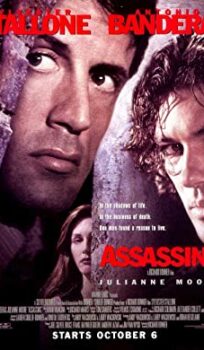