After a father’s daughter is gunned down in cold blood, the father takes it upon himself to find and kill the gunman. After killing the gang member, the father finds his way to Precinct 13, which is about to be closed permanently and is only occupied by one cop named Bishop, a phone attendant, and female office worker Leigh. In the cells below are a sick inmate, and Napoleon Wilson, an infamous crook with a penchant for wisecracks and one-liners. Ultimately, the station is surrounded by the murdered gang leader’s posse, who are attempting to get the father

After the phone attendant is killed, Bishop, Leigh and Napoleon hole up in the basement, with plans of defending themselves in a narrow hallway behind a giant sign. Bishop triggers an explosion with the remaining ammo and kills the rest of the invading gang members. Although it is inferred that Napoleon will return to prison, Bishop compliments him for saving his life, and Leigh storms out knowing that Napoleon will be imprisoned regardless of the fact that he saved all three of them. 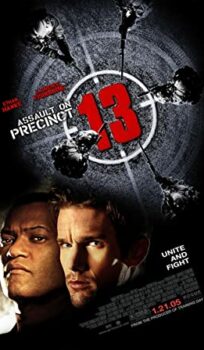