(Despite being named after the comic book of the same name, it actually uses plotlines from Asterix the Soothsayer)

The village is abandoned after Prolix foresees a great disaster if the Gauls do not leave. Asterix and Obelix stay behind to look after Vitamix (known as Getafix to Asterix fans). Asterix’s suspicions that Prolix is a fraud are confirmed when he sees him enter with the Romans. Vitamix creates a concoction that fouls the air, forcing the Romans to retreat. Obelix, blaming himself for Vitamix’s condition due to hitting him with a menhir decides that the best way to cure him is another menhir. However, the same concoction that Vitamix created also restores his memory and sanity. Cured, Vitamix takes Asterix and Obelix to a nearby island where the rest of the villagers have gathered.

At the Roman Camp, the centurion decides that having a fortune teller could be very useful to him taking over all of Rome despite the law requiring fortune-tellers to be arrested. The Gauls invade the camp, strengthened to the magic potion, much to the shock of the centurion. Since Prolix never foresaw this, he is exposed as a fraud. Impedia, realizing that Asterix was right all along, reprimands Prolix for deceiving her and the rest of the village. After the camp is destroyed, the Gauls return to their village. During the fight, Prolix was hit with one of Obelix’s menhirs, reducing him to the same state Vitamix had been in for much of the movie. An arriving senator who believed all Gaul was conquered demotes the centurion to a lowly legionnaire. The legion soldier who was used by the Gauls as a guinea pig for Vitamix’s various past concoctions during the movie, including one that makes him lighter than air, releases himself from the rope that prevented him from rising too high and flies off together with an owl companion. He is last seen flying across the moon while the Gauls are having their celebratory feast. 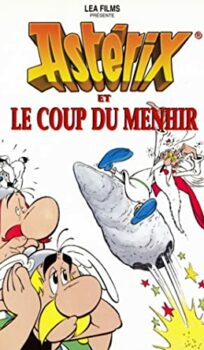