SHORT VERSION:
Commandante Guzman eventually sends in a helicopter to drop fire bombs on the Niaruna tribe’s village to force them to leave the area. Martin – who had come with the Niaruna convert Uyuyu the day before to warn Lewis and the tribe of the impending attack – assists Lewis in getting the Niaruna out of harm’s way and send them running into the forest, but he is then killed by Uyuyu. Also, the tribe realizes that Lewis isn’t Kisu Mu – the messenger of Kisu, a vengeful god they worship – when he can’t stop the helicopter. Lewis escapes via canoeing down the river, but soon finds himself confronted by the tribe’s chief Aeore. He prepares to fire an arrow at Lewis, leaving Lewis no choice but to shoot and kill him with his revolver. Lewis travels on for an undetermined length of time, ending up alone.

Some days later, Leslie sends a message to his superiors where he blames Lewis for his and Martin’s failure to convert the Niarunas to Christianity, and that Uyuyu had told him that the tribe had killed Martin. He also is declaring that no further missionary work will be done in the territory, considering it a lost cause.

LONG VERSION:
One day, after Andy (Daryl Hannah) has a swim in the nude, Lewis (Tom Berenger) – having taken on the attire of a Niaruna tribesman due to their belief that he is Kisu Mu, the messenger of a vengeful god named Kisu, due to him parachuting from the sky into their village earlier in the film – approaches her, and he tenderly kisses her a few times. She runs away before things can escalate beyond that, and she tells Martin (Aidan Quinn) about it and how she figured out that the tribesman was Lewis.

However, Lewis failed to notice that she had the flu, so he becomes a carrier of her illness and accidentally infects the whole Niaruna tribe with it, and the people start to die because they have no resistance to it. Lewis goes to the missionary camp with some of the other Niaruna and begs Martin, Leslie (John Lithgow), and Andy for medicine, in the process revealing that Andy had been in contact with him. It is during this that Hazel (Kathy Bates) is discovered to have lost her sanity, stemming from the earlier death of her son Billy (Niilo Kivirinta) from blackwater fever. Martin and Andy give Lewis the medicine after Leslie refuses to help and gets choked by him, and before leaving, Lewis tells Martin that he and everyone else had better leave now. Believing that Lewis has been interfering with their efforts to convert the Niaruna, Leslie radios Mae de Deus to report what just happened to him to Commandante Guzman (José Dumont), despite Martin warning him that this will give Guzman the excuse he needs to come in and use military-style force to get the Niaruna to leave the area. While Lewis divvies out the medicine to the tribe, Aeore (S. Yriwana Karaja) tells him that he doesn’t trust him, due to his people suffering from this sickness after his arrival and his ability to speak English.

Father Xantes (Nelson Xavier) and the Niaruna convert Uyuyu (Jose Renato Lana) pay the missionaries a visit the following day, and Xantes reveals to them that the reason that Guzman gave them a year to pacify the Niarunas and get them to leave is because there is gold on their land. He then informs them that two gold hunters were recently killed by another forest tribe, which will serve to reinforce Guzman’s decision to drive away the Niaruna by force. He warns them all to leave immediately, but they must first tell Lewis to get the Niaruna to escape into the forest because they will likely get shot if they resist, and Uyuyu will take them to their village. The next morning, Hazel and Andy are sent back to Mae de Deus with Xantes to be kept safe, but Martin sees Uyuyu leaving with them and aggressively forces him to lead him to the village, despite protests from Leslie. As he departs, he tells Leslie that he’d better leave if he doesn’t come back by noon tomorrow.

Arriving at the village, Martin finds Lewis and warns him of the danger that the tribe will be facing if they stay, but Lewis replies that they’re too sick to leave. That night, the flu claims the life of the chief, Boronai (Stênio Garcia), and he is succeeded by Aeore. Lewis tells Martin about how the tribe believes him to be Kisu Mu and explains who Kisu Mu is, and Martin figures out that Kisu Mu must be their version of Jesus, and comes to conclude that he had been teaching them that Jesus was their evil spirit this whole time. He soon says that it would’ve been better for the Niaruna if they had never known him or Lewis.

The next morning, the fearful Leslie hightails it back to Mae de Deus without waiting for noon to come. A short time later, Guzman’s soldiers appear above the Niaruna village in a helicopter and start dropping fire bombs. Lewis and Martin manage to get the Niaruna safely away, but in the process, the tribe realizes that Lewis isn’t Kisu Mu when he cannot stop the helicopter. Amidst the chaos, Uyuyu strikes Martin twice in the head with a club and kills him. Lewis shows up after that and looks to shoot Uyuyu with his revolver, but decides to just let him run away.

Lewis effects an escape by canoeing down the river, but a short time into his flight, Aeore appears on a downed tree and prepares to shoot an arrow at him. Lewis shoots him and he falls into the river, and he stands up and tells Lewis that he knows now that he is just a white man before falling down dead. Lewis floats down the river for an undetermined length of time until he stops at a lonely riverbank, and he is last shown looking out into the distance with sadness on his face.

Back at Mae de Deus some days later, Leslie reads a letter off to Andy that he is sending to his superiors, in which he is placing the blame for the failed conversion of the Niaruna on Lewis, and that Uyuyu had told him that the tribe had killed Martin. He also is declaring that no further missionary work will be done in the territory, considering it a lost cause. Upset by all of this, Andy leaves the room they are in.

The movie ends with the camera zooming out on Martin’s body still lying in the ruined village until it stops at a distant shot of the village and the surrounding jungle. 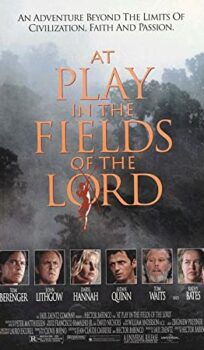