A pack of wolf-like alien creatures have been attacking Moses (John Boyega) and his friends throughout their south-London apartment block.  It is discovered, while trapped in a marijuana grow-operation run by Ron (Nick Frost), that the reasons the creatures have been targeting them is that they had earlier killed a female of the species and anyone who got in contact with it got covered in pheromones, which attract the more violent male creatures (the pheromones glow in the ultraviolet lights within the grow-op).

The police arrive and, like Moses had earlier predicted, they automatically assume that he and the other other survivors (who have a reputation as hoodlums) were behind the carnage and they arrest them, despite the protests from Sam.  Even though he has been arrested, the other tenants of the block, who know the truth, cheer Moses on as a hero. 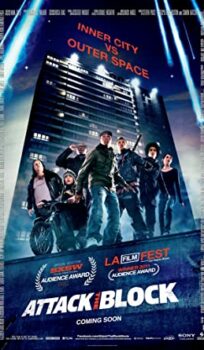