Short pooper:
Little Charles (Benedict Cumberbatch) and Ivy (Julianne Nicholson) are, in fact, half-siblings, as the result of an affair between Mattie Fae (Margo Martindale) and Beverly (Sam Shepard), Violet’s (Meryl Streep) husband; also, Violet claims to have always known about it -which she coldly discloses to a despondent Ivy, causing her to leave in tears- and furthermore assures that, partly because of it, she worried first about dealing with their joint money in the bank before helping Beverley, by which point he was already gone. Barbara (Julia Roberts) disowns Violet and leaves forever. Violet is seen alone, sulking, with only Johnna (Misty Upham) by her side.

Longer version:
The gathering of the Weston family is rifed with one sour clash after another all throughout, and someone is constantly seen storming off due to various reasons and unexpected revelations. The common thread is the acid, extremely callous “truth-spewing” of the widowed matriarch, Violet, who is also dealing with over-medication from cancer.

Barbara, Violet’s oldest daughter, comes to discover that her dim-witted cousin Little Charles, whom her sister Ivy is secretly in love and wanting to elope with, is, in reality, their half-brother; aunt Mattie Fae confides that she had a brief fling with Beverley, apparently unbeknownst to Violet, which resulted in this birth; Violet is taken aback by this and understands why Mattie Fae has kept objecting to their budding romantic relationship but swears secrecy. Meanwhile, Violet’s younger daughter, Karen (Juliette Lewis), takes off with her fiancé Steve (Dermot Mulroney), who was caught by Johnna molesting Barbara’s teenage daughter, Jean (Abigail Breslin); Barbara’s soon-to-be ex-husband, Bill (Ewan McGregor), who came along pretending to be in solid terms with Barbara, also departs with Jean, fed up with the venomous atmosphere and the events transpired.

Everything comes to a collision course when, during an attempt to have dinner together, Ivy insists on “bringing important news to everyone,” and Barbara staunchly cuts her off while struggling with Violet to eat something, to which the insufferable woman refuses while they spew sardonic insults at each other. It is then that Violet, with no care whatsoever, reveals not only having known all along about Beverly’s affair to Mattie Fae, but that it made Little Charles a half-brother to Ivy, Barbara, and Karen. Ivy, disgusted by this secret and more so because Barbara did know about it and kept quiet, leaves in shock, swearing to never come back. Barbara and Violet, by this point -other than Johnna- the only ones left in the house, keep arguing, and Violet discloses that Beverley did contact Violet the week prior to the events seen throughout the movie -his suicide being what started everything-, but she deliberately waited until she could first move their joint safe deposit box from the bank, by which point he had already died.

This proves to be the last straw for Barbara, who, realizing her mother is irredeemably damaged, just superficially hugs her and departs. Violet first finds herself dancing and yelling loudly but, when she understands she has been deserted by everyone, starts to weep and sulk, with only Johnna comforting her. The movie ends with Barbara angrily pulling over to the side of the road, crying, recomposing herself and, then, resuming her drive back to Colorado, leaving her mother and family home behind. 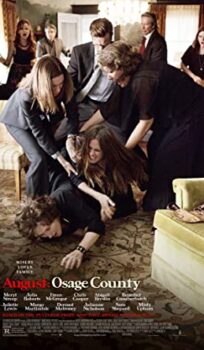