The movie is told in a flashback with a voice over from Evan Taylor (August Rush as played by Freddie Highmore). He tells of how Lyla Novacek and Louis Connelly meet, fall in love and have a one night stand.  Lyla is a concert celloist and Louis is the singer in a band.  Lyla leaves the one night stand promising to meet Louis the next day at the Arch (one night stand was overlooking the Arch on the rooftop).

Lyla is swept away in a limo to her next concert by her evil father and never meets Louis.  Louis sees her leave and is heartbroken.  Lyla then finds out she is pregnant.  While she is pregnant, she has a fight with her father and runs out in front of a car.  At the hospital her father tells her that her boy is “gone”.   Actually, Evan (August) is put up for adoption by his grandfather (he forges Lyla’s name) and ends up in a Boys Home in New York where he hears music constantly and is mistreated badly.
Lyla finds out from her dying father what he did and she goes searching for Evan (August) and ends up in New York.  There are a few scenes where she almost finds him but doesn’t.

Evan (August) runs away to New York. (There is one scene that is touching where he meets Louis in the park but neither know they are father and son).

Evan (August) ends up in the clutches of The Wizard (Fagin type character played very convincely by Robin Williams). The Wizard (Robin Williams) is the one that names Evan “August Rush” and tells him to never tell anyone his real name as he will then end up back at the Boys Home.
Evan ends up at Juillard where he is a prodigy. He writes a Rhapsody and it is to be played in the park. Robin Williams also treats Evan badly and even withdraws him from Juillard.

Evan eventually runs away from him and ends up at his concert in the Park to conduct the Orchestra. Lyla is also to perform at this concert.  Louis sees Lyla’s name on an advertisement and ends up at the concert looking for her.

Louis and Lyla find each other (touching scene of holding hands) and then Evan turns around from directing the orchestra and sees them and somehow, they all now know who they are. 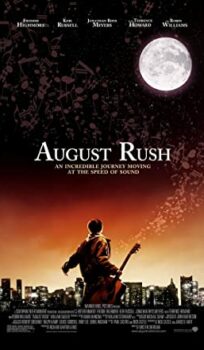