Mame (Rosalind Russell) becomes the legal guardian of her young nephew Patrick after her brother dies.  Mame is a single, eccentric woman who lives life to the fullest and has some unconventional ideas on how to raise Patrick.  Unfortunately for Mame, banker Dwight Babcock controls Patrick’s finances and insists that Patrick goes to a boarding school to get away from Mame’s bohemian influence.  Patrick visits Mame often, they have crazy adventures and the two become very close.  When the Depression hits, Mame struggles to hold down a job until oil tycoon Beauregard Burnside (Forrest Tucker) catches her eye.  After a zany hunting adventure, Beau proposes to Mame.  The two travel for months on an extended honeymoon but when Mame receives a letter from a now-grown Patrick about a girl he is dating, Mame wants to head home to New York. Sadly on their last adventure before leaving for New York, Beau falls off a mountain and dies.

Back in New York, Mame mourns the loss of Beau but quickly recovers when it is suggested that she write her memoir.  While working on her book, Patrick (Roger Smith) starts bringing a Connecticut socialite named Gloria around and Mame realizes that Patrick has chosen a close-minded and snooty girl for a mate.  In a final attempt to break them up, Mame hosts Gloria, her parents and a few other crazy friends at her home.  As the night unfolds, Patrick realizes that Gloria isn’t the right girl for him and they break up.

Years later, Patrick has married Mame’s lovely personal secretary Pegeen, and they now have a young son the same age Patrick was when he first came to live with Mame. Mame is still as crazy as ever and as she readies to embark on a trip to India, she convinces Patrick to let his son accompany her. 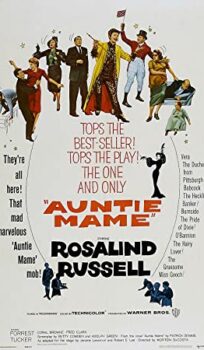