David (Rock Hudson) builds a ski resort which his mom (Jeanette Nolan) helps finance it. His ex-wife Caroline (Mia Farrow) comes to report on the opening for her magazine. Photographer Nick (Robert Forster) warns that by cutting all the trees, the resort will be at risk of avalanche.

An Avalanche arrives after small plane hits the top of the mountain. The skier buried in snow survives. A man and kid are struck on ski lift. The kid survive but the man gets electrocuted when grabbing cable.

Caroline spends the night with Nick at his cabin. They are fine and head to resort to help.

David’s mom is trapped in the restaurant,  Nick and David dig her out, but then ambulance taking her to hospital slides off bridge over ravine and bursts into flames. Caroline, riding in ambulance too, is thrown from ambulance before the wreck. Nick and David rescue her. Caroline says bye to Nick then consoles David in his office and they drink champagne. 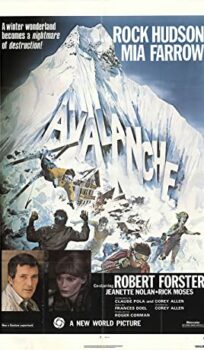