Pooper:
Thanos assembles the Inifnity Stones, snaps his fingers, and destroys half of the characters who survived up to that point of the movie. Among the survivors are Iron Man, Captain America, Thor, Hulk, Black Widow, War Machine, M’Baku, Okoye and Rocket. Before he is destroyed, Nick Fury sends a distress signal to Captain Marvel.

Longer:
Thanos boards the ship containing the last of the Asgardians in search of the Space Infinity Stone (housed within the Tesseract). He intends to assemble the six Infinity Stones to gain omnipotent power in order to eradicate half the population of the universe. Although the Hulk fights him, Thanos makes short work of him with some influence by the Power Stone (stolen off-screen from the stronghold on Xandar). Before he can kill Bruce Banner, Heimdall uses the last of his power to summon the Bifrost bridge to send him to Earth. Loki reveals that he stole the Tesseract from Asgard prior to its destruction (Ragnarok), and gives it to Thanos. Thanos kills Heimdall and Loki before sending Ebony Maw and Cull Obsidian to Earth to retrieve the Time Stone from Doctor Strange and the Mind Stone from Vision. He adds the second of six stones to the Infinity Gauntlet.

Banner crash lands in the Sanctum Sanctorum and warns Strange and Wong. Strange and Banner recruit Tony Stark just before Maw and Obsidian arrive on Earth. Peter Parker witnesses the invasion on his way to school, and rushes to help Stark and Strange. Unable to remove the Time Stone from Strange’s neck, Maw instead kidnaps him to bring him back to Thanos on Titan. Stark and Parker follow, with Parker being given the Iron Spider costume using the same nanotechnology in the new Iron Man Suit. Banner, still on earth and unable to transform into the Hulk, calls Captain America.

Vision is in hiding in Scotland with Wanda. While out for a walk, they are attacked by Proxima Midnight and Corvus Glaive, but are saved by Cap, Black Widow and Falcon. James Rhodes offers his help against the wishes of General Ross and the council. Vision realizes that if the Mind Stone is destroyed, Thanos cannot complete the Gauntlet, but it would also kill him. Cap suggests they go to Wakanda to have the stone safely removed before Wanda can destroy it. In Wakanda, King T’Challa tells Bucky “It is time for the White Wolf to be woken from his slumber,” and offers him a new arm.

Back in deep space, the Guardians of the Galaxy respond to the distress signal from the Asgardian ship, and find Thor floating through space. When Thor awakens, he immediately demands that the ship be directed toward Nidavellir so he can have a weapon made to both replace Mjolnir and face the power of Thanos and the Gauntlet (which was also made on Nidevellir). Thor leaves with Rocket and Groot while Quill, Gamora, Drax, Nebula, and Mantis head for Knowhere to beat Thanos to the Reality Stone (Thor: The Dark World). They arrive too late, and Thanos recaptures Nebula and Gamora. It is revealed that Gamora knows the location of the Soul Stone – the planet Vormir. When they arrive, the keeper of the Soul Stone, revealed to be Red Skull (Captain America: The First Avenger), tells Thanos that a beloved soul sacrifice must be made in order to acquire the Soul Stone. Shown in flashback, we learn of Thanos’s taking of Gamora’s people, and his adoption of her into his life. As Thanos truly loves Gamora, he sacrifices her and is given the Soul Stone in return.

Nebula frees herself and sends a distress signal to the Guardians to meet her on Titan. On Maw’s ship, he finds that is unable to free the Time Stone from Strange’s spell, even if he does kill him. Iron Man and Spidey team up and defeat Maw using a trick Parker learned from “this really old movie ‘Aliens'” – Stark fires a hole in the ship’s hull and Maw is hurled into space, where he dies.

Once the arrive on Titan, Strange, Stark, and Parker meet with Quill, Drax, and Mantis. Strange uses the Time Stone to view millions of possible futures, and discovers only one where Thanos loses. Thanos appears and demands the Time Stone, but is eventually subdued by the combined forces long enough to get the gauntlet off his hand. Unfortunately, Quill realizes that Thanos killed Gamora, and breaks the hold Mantis had on him, causing Thanos to make short work of the rest and regain the gauntlet. He fights Stark mano e mano and eventually impales Stark on his own weapon, but Strange offers the Time Stone in exchange for Stark’s life. Thanos agrees, and heads to Earth to retrieve the last stone, in Wakanda.

On Nidavellir, Thor manages to help the dwarf smith Eitri to make Stormbreaker, a warhammer capable of channeling the power of Thor as well as the ability to summon the Bifrost. Groot provides his branch to make the handle.

Cap, Falcon, Rhodes, Natasha, Wanda, and Banner in the Hulkbuster arrive in Wakanda and task Shuri with the safe removal of the Mind Stone so it can be destroyed without killing Vision. Thanos’s forces arrive and begin to lay siege to Wakanda, although the efforts are short-lived by the defense of the Avengers and the Wakandan armies led by T’Challa and Okoye as well as those of M’Baku. Though they are able to decimate the Outriders and eventually take out Glaive, Obsidian, and Proxima, Thanos is still able to acquire the Mind Stone (using the Time Stone to reverse Wanda’s destruction of it, thus killing Vision twice).

Thor propels Stormbreaker toward Thanos, and it cuts through the Infinity energy straight into his chest. Thanos taunts Thor by saying he should have aimed for the arm. Thanos then snaps his fingers to wipe out half the population of the universe. He wakes in a purgatory-like area, and sees a child Gamora who asks what his plan cost him. He responds, “Everything.”

Back in the present, the Gauntlet is in shambles but for the hold it has on the 6 stones. Thanos opens a portal and disappears. One by one, Bucky, Falcon, T’Challa, Wanda, Parker, Groot, Mantis, Drax, and Quill dissolve into dust. Stark asks Strange why he gave Thanos the Stone. Before dissolving away, Strange replies, “It was the only way.” Thanos is shown on a barren paradise planet, alone.

Post credits – Nick Fury and Maria Hill are driving in a city when suddenly people start to dissolve. Before Nick dissolves, he activates a device that shows the symbol for Captain Marvel. 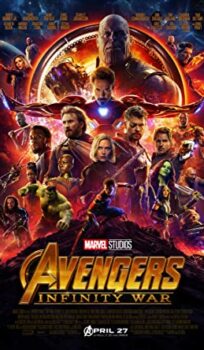