Submitted by Noir of the Night

–The action in the film starts when Abdullah (Amit Murjani) purchases a rifle, to protect his goat herd from .predatory jackals. His two sons, Yussef (Boubker Ait El Caid) and Ahmed (Said Tarchini) mess around with the gun, and from a distance they accidentally shoot Susan (Cate Blanchett) as her tour bus passes by a nearby road. This action has some sort of effect on the rest of the film’s occurrences (although not so much the storyline with the nanny).

–Richard (Brad Pitt) and Susan (Cate Blanchett) end up stranded in Morocco after Susan is shot in the neck. Although the critically injured Susan must wait hours for any help to arrive, a helicopter from America eventually shows up, and her life is saved.

–Amelia (Adriana Barraza), nanny to the two young children of Richard and Susan, ends up taking them with her and her nephew, Santiago (Gael Garcia Bernal) to her son’s wedding, when no other nanny can be found. However, on the drive home, they are stopped by a border patrol officer. They flee in panic, and Santiago drops off Amelia and the two children in the desert, promising to pick them up in the morning. He never shows up, and when Amelia briefly leaves the children to search for help, she is discovered by a police officer. He arrests her when she fails to locate the children, and she is eventually deported. The children are found and brought to safety.

–Yasujiro (Koji Yakusho), a Japanese businessman with a connection to the rifle used in the shooting of Susan, is questioned by two detectives. His daughter is Chieko (Rinko Kikuchi), a deaf teenager who has never been able to deal with the suicide of her mother. Alienated from the world due to her deafness and grief, she invites one of the detectives over (claiming to have information about the rifle), and uses the opportunity to make sexual advances toward him. He rejects these advances. Later, Yasujiro comes home, and, finally understanding his daughter’s pain and loneliness, comforts her, suggesting an eventual catharsis and understanding between them.

–The police eventually track the gun to Abdullah, and beat his wife to coerce a confession from him. His two sons eventually do tell him what they have done, and they flee from the police with the rifle. A shootout ensues, with Yussef firing at the police as they fire back. After his brother Ahmed is shot, Yussef, the one who actually fired the fateful shot, turns himself in, asking for help for his wounded brother. 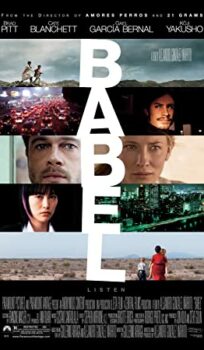