Dr. Kiviat (Patrick McGoohan) and the revolutionary soldiers eventually succeed in capturing Baby and take her and her already-captured mother to a village that the soldiers are using as a base. Later, while George (William Katt) and Susan (Sean Young) are sitting around feeling defeated and worrying about what will become of Baby, Cephu (Kyalo Mativo) – the chief of a forest tribe that they had met that sees Baby and her mother as legends – suddenly appears. He has them follow him to a spot by the river where his tribe is waiting with Kenge (Hugh Quarshie), the bush pilot who dropped George and Susan off in the area, and Kenge tells them that he saw where the brontosaurs have been taken to and that he and the tribe are going over there now to free them.

George, Susan, and the tribe sneak into the village and start some fires to distract a bunch of the soldiers so they can get closer to the dinosaurs, but soon find themselves battling the others. Thankfully, Kenge flies overhead and drops firebombs to even their odds. George, Susan, and a few tribesmen soon make a break for Baby and her mother, and while Susan and the tribesmen are able to cut the mother free of her bindings, George is unable to stop Kiviat from driving off in a truck with Baby caged in the back. The mother chases after Kiviat while George and Susan follow on a motorcycle, and when the mother catches up to Kiviat, he swerves the truck to hit her in the head and knock her down before driving out of the village. George and Susan continue the pursuit while the mother regains her footing.

The duo are able to get up alongside the truck, and Susan smashes the front windshield with a hatchet she brought, causing Kiviat to lose control and crash. He crawls out of the wreck and finds Baby lying apparently dead on the ground, but shortly afterward, he finds himself confronted by the mother, who clamps her jaws down on him and crushes him to death. George and Susan then check on Baby and they also think she is dead, but Baby thankfully wakes up moments later, having just been knocked unconscious.

George and Susan then watch with sadness and relief as Baby and her mother head off into the jungle, and they mutually agree that some legends are better off as just that. 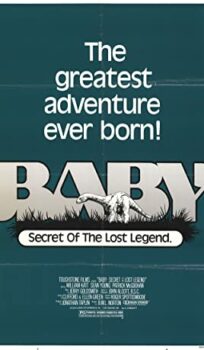