Set between the mid 1920’s to the early 30’s in Hollywood, Manny Torres (Diego Calva) is a Mexican immigrant working odd jobs while trying to make a name for himself. He encounters veteran silent film actor Jack Conrad (Brad Pitt), who helps him get better work, as well as aspiring starlet Nellie LaRoy (Margot Robbie), with whom Manny falls in love with. While Nellie’s career takes off, the emergence of talking pictures begins a decline in Jack’s career.

Nellie’s behavior proves too chaotic to keep her employed, so Manny tries to help revamp her image, to no success. Although Jack attempts to stay relevant, he is told his star has faded and that he can take comfort in knowing his films will be viewed for future generations. He ends up committing suicide in his hotel room.

Nellie goes to Manny to help pay off debts to gangster James McKay. Manny gets help from an on-set drug pusher called The Count, but they end up bringing McKay prop money, which forces them to go on the run when McKay and his thugs go after them. Manny convinces Nellie to run away with him to Mexico, but she ends up disappearing after realizing she will only bring Manny more trouble. The Count is killed by one of McKay’s thugs, who forces Manny to leave Los Angeles.

20 years later, Manny returns to Los Angeles with his wife and daughter after setting up a business in New York. He goes to the theater to watch “Singin’ in the Rain” and cries because it reminds him of Nellie. However, he finds solace in knowing he achieved his dream of being part of something bigger. 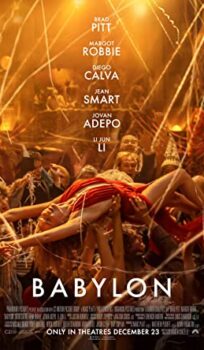