Bink (Adam Robert Worton & Jacob Joseph Worton) finally defeats Eddie (Joe Mantegna), Veeko (Brian Haley), and Norby (Joe Pantoliano) by having them chase him onto a high-rise building under construction and subjecting them to different painful outcomes before crawling away. Afterwards, the crooks go back to their apartment to lick their wounds.

Meanwhile, different people who saw the story of Bink’s kidnapping in the media call the police and reported a lost baby in different areas. These reports make their way to FBI Agent Grissom (Fred Dalton Thompson), and as he goes through the list of sightings with Bink’s parents Bennington (Matthew Glave) and Laraine (Lara Flynn Boyle) and the nanny Gilbertine (Cynthia Nixon), Gilbertine suddenly realizes that Bink is living out the same journey the baby took in his favorite book, “Baby’s Day Out”. After letting Grissom and the parents know about this, she says that Bink’s next destination after the construction site will be “stopping at the old soldiers’ home to visit Mr. Tinsel”. Knowing that this means the retirement home for war veterans, the parents, the cops, and the FBI make haste to that location. Sure enough, Bink goes to the retirement home, and one of the residents points out to the others that the baby is the missing Bink, and then everyone keeps him entertained until his parents and the agents show up to get him.

On the drive back home, Bink spots the kidnappers’ apartment building and points at it, and repeatedly says “boo-boo”, which is his nickname for the “Baby’s Day Out” book and was left there when he first escaped. His parents soon figure out that that building was where the kidnappers first took him, and Grissom tells two other agents to radio for backup before they all turn around and head over there. The agents find Eddie, Veeko, and Norby and place them all under arrest, but only after Eddie surrenders the book on their orders.

The parents take Bink home and tuck him into bed (which also mirrors the story’s end). However, after they leave his room, he pulls another book off the shelf titled “Baby’s Trip to China” and smiles and laughs mischievously 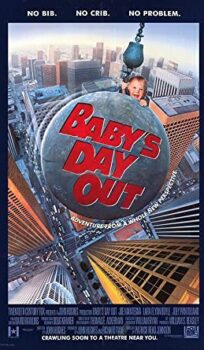