SHORT VERSION:
Debbie eventually infiltrates Rick’s party disguised as a prostitute to try to catch him being unfaithful to her, her suspicions about his fidelity having been aroused by one of Cole’s sneaky attempts to break them up so he can get her back. Stan and Gary spot her and alert Rick to her presence, so he tells Gary to go up to her, pretend that he doesn’t know her, and send her into the master bedroom to meet with him. Gary does as instructed, and soon after she gets in and gets Rick in bed, he comically pounces on her. She angrily pushes him off and reveals herself, and though Rick informs her that he knew it was her, Debbie replies that she doesn’t believe him and then leaves the room. He follows her out and emphatically tells her that he has not strayed on her, but after she declares that their wedding is off, he proves his innocence by getting everyone’s attention and asking them if he has had sex with anyone here tonight, and they all say “no”.

The hotel manager then shows up with some cops to shut down the party, causing everyone to flee the hotel. However, Rick and Debbie get separated amid the commotion, and Rick gets out through the back exit just before Debbie does. However, after she gets out, Cole – having been driven nuts by his repeated failures to end Rick’s and Debbie’s relationship as well as by a couple of crazy tricks that Rick and his friends pulled on him – appears behind her and seizes her, telling her that she belongs to him, and then makes off with her in a construction truck. Thankfully, Rick and his friends see Cole taking Debbie away and give chase in Rick’s bus. The chase ends at a multiplex hosting a 3D film festival, and Rick finds Cole holding Debbie inside one of the theatres. He then fights Cole and knocks him out before leaving with Debbie.

Rick and Debbie get married, but when they board Rick’s bus to leave for their honeymoon, they find that they have to deal with Rick’s emotionally unstable friend Brad as their driver.

LONG VERSION:
While Rick’s (Tom Hanks) bachelor party is in full swing in a luxurious suite in the Parkview Hotel, Cole’s (Robert Prescott) mission to get him to leave Debbie (Tawny Kitaen) so he can get her back (which has been encouraged by Debbie’s father Ed [George Grizzard], since he doesn’t consider Rick to be an ideal future-son-in-law) takes a dark turn when he posts himself in a room in a wing of the hotel that lies directly across from the suite and tries to take out Rick by shooting a couple of crossbow bolts at him through the windows. Thankfully, both of the bolts miss, and after Rick and Jay (Adrian Zmed) notice them stuck in one of the walls and then look out the window and spot Cole readying another bolt, Rick decides that he has had enough of Cole’s shenanigans, so he, Jay, and Rudy (Barry Diamond) locate Cole’s room and break into it. They proceed to strip him naked and tie him up in a bedsheet, then make a rope out of extra bedsheets and attach one end to him and the other end to the frame of the bed before sending him out the window, intending to leave him hanging outside until after the party.

A short time later, Cole’s constant struggling causes the bedsheet rope to come loose from the bedframe, and he falls butt-first onto a car’s roof below, but is virtually unharmed. When he walks into the hotel’s lobby, he crosses paths with Ed, who has just finished serving as a keynote speaker at an event in the hotel for Elkshead Beer’s distributors. Cole fills him in on what just happened to him, and after he tells Ed what room the party is being held in, Ed gives him some money to buy some clothes with (which he purchases at the hotel’s duty-free shop) and tells him that he is going to go up there right now to take care of this problem. He enters the suite just as Rick and the guests are about to entertain themselves with a donkey show, and appalled by this sight, he walks up to Rick and rebukes him for allowing such a show to take place before telling him that, once he tells Debbie about this, she will never see him again. Jay goes up to Ed and tells him that he really should call Debbie right now and that there is a phone in the back bedroom that he can use, but as Ed enters the bedroom, Jay sends five prostitutes in after him while he follows behind them with his camera in hand.

Meanwhile, Debbie suspects that Rick is up to no good when two prostitutes show up at her bridal shower at her family’s house and tell everyone that they were supposed to be going to a bachelor party. However, Debbie is unaware that Cole – in one of his attempts to split up her and Rick – had tricked the prostitutes’ pimp into sending them here instead of Rick’s hotel room. Debbie eventually spurs her mother, her sister, and her friends to join her in dressing up as prostitutes themselves, going to the Parkview, and infiltrating Rick’s party in the hope that one of them will catch him doing something that goes against the definition of fidelity. They first end up in a room occupied by a bunch of horny Japanese businessmen, but they eventually manage to escape them (thanks to Debbie’s sister staying behind and willingly throwing herself at the men), and while the rest of the group flees down a stairwell, Debbie takes notice of the floor’s room numbers on the wall and discovers that she is on the same floor that Rick’s party is on. She enters the suite and is shocked to see that the party is one raucous, rambunctious, and raunchy affair, and she therefore assumes that Rick is definitely doing something disagreeable. Stan (William Tepper) and Gary (Gary Grossman) spot her from afar and alert Rick to her presence, so Rick instructs Gary to go over to her, pretend that he doesn’t know her, and tell her to go into the master bedroom to meet with him. Gary does as he asks, and Debbie heads into the room, expecting to give Rick the shock of his life.

After she gets Rick into bed with her and he comically pounces on her, she angrily pushes him off and rips off her wig to reveal herself. Rick informs her that he had already seen through her disguise, but she replies that she doesn’t believe him and then leaves the room, thinking that he truly is an untrustworthy philanderer. Rick stops her in the middle of the party and attempts to explain that he has kept his promise to not screw around on her, but she doesn’t buy it and tells him that their marriage is off. To prove that he is telling the truth, Rick gets the party to stop for a moment and asks everyone if he has had sex with anyone here tonight, and they all say “no”. He then returns to talking to Debbie one-on-one and tells her that, while there are some prostitutes present, all he has ever wanted is her. Convinced of Rick’s faithfulness, Debbie apologizes to him before telling him that she wants to get frisky with him, and he agrees to it. However, she heads into the bedroom that her father is in, and she finds him clad in S&M attire and bound and gagged on the bed with Jay taking pictures of him as the prostitutes pose around him.

The hotel’s manager then shows up with some police officers to shut down the party, and everyone flees. When Rick, Debbie, and one group of partiers exit the elevator on the main floor and reach the staircase at the top of the lobby, they find a bunch of other cops stopping and seizing some of the other partiers below, along with Stan, Gary, and Debbie’s mother and friends, so Rick yells for everyone to make a break for the back exit. However, as they do so, they collide with another group of partiers coming out of the elevator, and this causes Rick and Debbie to get separated. Rick gets outside first, but when Debbie gets out moments later, the now-exasperated Cole – having followed Debbie out here after he saw her in the lobby after exiting the duty-free shop – comes up behind her and seizes her, telling her that she is his and no one else’s. Rick, Jay, Rudy, and Ryko (Michael Dudikoff) spot Cole carrying her away and give chase, but after Cole forces Debbie into a construction truck and drives off with her, Rick gets on his bus with his friends and the remaining partygoers and pursues Cole.

Rick chases Cole through the streets until Cole stops at a 36-screen multiplex hosting a 24-hour 3D film festival and forces Debbie inside one of the theaters in order to hide from Rick. Rick and company then enter the multiplex (except for Rick’s friend Brad [Bradford Bancroft], who opted to remain on the bus) and split up to check every theater for Debbie, and Rick finds her with Cole in the 21st one. Cole takes Debbie up to the front of the screen and challenges Rick to fight him there, and as the guys duke it out, they unknowingly do it in full synchronization with a fight going on in the movie that the audience is watching (some audience members make contact with Rick and Cole at different times, but they just write it off as a movie effect). Rick eventually punches out Cole, and he and Debbie embrace and kiss before departing. Brad – who has unsuccessfully tried multiple times during the film to commit suicide due to how despondent he is over the end of his marriage – gets behind the wheel of the bus and drives it head-on at one of the theater’s walls, hoping to die on impact, but he just crashes through it and into the theater that Rick and Debbie were just in, which gets applauded by the audience because they, too, think of it as nothing more than a 3D effect.

Rick and Debbie are next shown getting married, and after they are made husband and wife, they get on Rick’s bus so they can go to the airport to catch their plane to their honeymoon. However, they find themselves having to deal with a laughing, still-unhinged Brad as their driver. 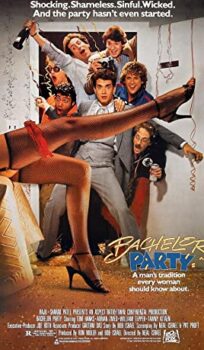