Thornton (Rodney Dangerfield) helps Jason (Keith Gordon) get on the diving team, and also finds a girlfriend in Diane (Sally Kellerman), his English Literature teacher. However, after his nemesis Dr. Barbay (Paxton Whitehead) shows Dean Martin (Ned Beatty) that Thornton plagiarized his English Literature paper on Kurt Vonnegut (which Kurt Vonnegut wrote up himself), he suggests to the Dean that Thorton take a comprehensive oral exam in all of his subjects to prove that he has done his work, and he should be expelled if he fails even one part of it. The Dean agrees to it.

Thornton studies hard with the help of Jason, Derek (Robert Downey, Jr.), and Diane. Come exam time, Barbay starts it off by giving him a question in 27 parts, which is virtually impossible to pass, but Thornton manages to answer it correctly, finally putting Barbay in his place. He then successfully completes the rest of the exam. Meanwhile, Jason and Valerie (Terry Farrell) admit their shared love for each other and kiss.

Once finished, Thornton goes to Jason’s championship diving meet. Distractions from Derek foul up the opposing team’s dives, Jason’s enemy Chas (William Zabka) hits a lackluster dive, and Jason hits a near-perfect dive. When it’s Chas’ turn to dive again, he fakes a cramp to try to make the team lose by forfeit. However, Coach Turnbull (M. Emmet Walsh) calls for Thornton to substitute for Chas, since he saw his great diving skills while he was training Jason. Thornton agrees to do it, and he performs the near-impossible Triple Lindy to win the meet for the university. Afterwards, Diane appears and tells him that he passed his subjects with all Ds – and an A from her class. 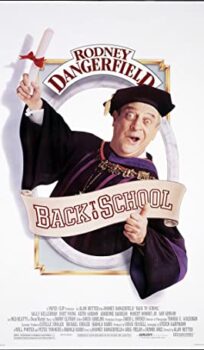