Brian (William Baldwin) manages to figure out that Adcox (Scott Glenn), a firefighter who was like an uncle to Brian and his brother Stephen (Kurt Russell) when their father died is the one responsible for the backdraft fires that killed the three associates of city alderman Swayzak (J.T. Walsh). The reason why he set the fires was because Swayzak secretly paid those associates to create a phony manpower study, and through that he made the budget cuts to the fire department to close them down, which in turn would allow the construction company he and his associates ran to remake them into community centers and rake in some serious cash from it. Swayzak and the others were basically making money off of the deaths of firefighters. Adcox was angered by all this and decided to get revenge. He planted some trychtichlorate he used for the arsons on Stephen’s boat as well, to make it look like he was responsible for them (Brian finds it and almost thinks Stephen was indeed the arsonist, but when he checked his locker at the fire house, he found nothing, and soon afterwards realized it was Adcox).

When Brian, Stephen, Adcox, and the rest of their division go to put out a really bad fire at a warehouse, Adcox confesses in front of Brian & Stephen that he is the arsonist and gives the reasons why he did what he did. Soon, the fire begins to rage totally out of control. As Brian & Stephen are making their way down the floors to escape it, Adcox confronts them both, knocking out Brian with his axe and almost getting into an axe fight with Stephen. Then, some oil drums explode and take out the bridge Stephen and Adcox are standing on, and Stephen ends up hanging onto the broken bridge holding Adcox by the arm while the fire rages on the ground below them. Adcox tells Stephen to let him go, but Stephen tells him that if he goes, then they’ll both go. Stephen loses his grip, and while Adcox falls to the ground below and is burned alive by the fire, Stephen lands on another bridge below, but suffers a huge gash in his side. Brian is able to get the firefighters to assist Stephen in getting out and into an ambulance, and the method in which he does so finally makes Stephen proud of him.

As Stephen is taken to the hospital with Brian riding alongside him, he tells Brian not to tell anybody that Adcox was the arsonist, saying it would hurt the fire department. Brian obliges. Stephen and Brian exchange some words of brotherly love to each other before Stephen dies from his wound. After attending the funerals of Stephen and Adcox, Brian and Donald (Robert De Niro) then appear at a press conference Swayzak is having, and present the press with the incriminating documents they had about the activities of Swayzak and his dead associates before leaving Swayzak to be questioned by the authorities.

It last shows Brian, back working as a firefighter, heading to another fire to put out. 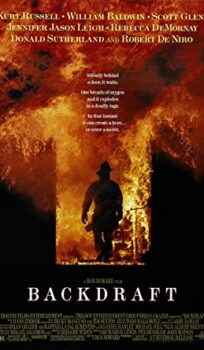