While in captivity, Carmen (Loni Love) manages to find a small rotten opening in one of the walls of the room she is being held in that leads into the ventilation ducts, so she breaks it open and crawls through the ducts until she finds an office. She ends up using the fax machine in there to send a message to the Baton Rouge P.D. stating that she is being held hostage at a compound in Greenwell Springs, and then she sneaks back into her room before any of the guards get too suspicious. Unfortunately, Police Chief Broussard (Davi Jay) – who is in cahoots with the kidnappers – gets a hold of this message first thanks to one of the many dirty cops working there, and he soon leaves the police station with some of those officers. Meanwhile, Frank (Danny Trejo) and Bernie (Danny Glover) find Landry (Jeff Pope), one of the kidnappers’ top henchmen, and torture him until he reveals where Carmen is.

Broussard and his men find Frank and Bernie before they can get to the compound and cuff them. They then take them to an isolated airstrip and have them put on a cargo plane occupied by some other corrupt officers, intending to drop them out of it to their deaths when it reaches a high-enough altitude. In the middle of the flight, Frank and Bernie overpower the cops and get free, but the pilot sabotages one of the engines before Frank knocks him out. Despite this, Frank manages to land the plane in a field deep in the woods. Meanwhile, Carmen’s parents Earl (John Amos) and Lois (Carol Sutton), her brother Ronny (Jimmy Bennett), and her fiancée Geoffrey (Sammi Rotibi) get the call from the kidnappers that they have been waiting for, and they instruct Earl to have Lois bring the $5 million ransom alone to the east gate of the Reynolds Oil Refinery at 6:00 p.m. Earl then goes to the police station to speak with Broussard about the call, but after being told by another cop that he is out right now and will be back in 20 minutes, Earl decides to wait in his office. Soon after, he notices Carmen’s fax sticking out of the trash.

Frank and Bernie find a motorcycle with a sidecar among the plane’s cargo and use that to drive to the compound’s perimeter. While wondering how they are going to get past the guards and get inside, they find themselves confronted by one of the guards, but thankfully, Earl suddenly appears and renders him unconscious. After Earl essentially tells the guys that his pacifist ways are going to be sitting this one out, they all sneak their way into the building and locate Carmen’s room, and as Earl shoots and kills several guards with a handgun that he brought with him, Frank and Bernie free Carmen. Bernie then gives her one of the guards’ handguns, and she, Earl, and Bernie proceed to kill most of the other guards.

Afterwards, the guys are surprised to see Carmen being held at gunpoint by Geoffrey, who reveals that he is neither American nor paraplegic and is the mastermind behind the kidnapping. He forces Carmen and the trio back into her room, and while the men get tied up in there by a surviving thug, Geoffrey reveals that he and Broussard are not only partners in this kidnapping scheme, but cousins as well, and they plan on keeping Carmen after they get the ransom because they need her to help them get out of the country. He and the thug then depart with Carmen for the oil refinery, but not before the thug sets the compound on fire in order to burn the protagonists alive. Fortunately, a short time after the villains leave, Ronny comes plowing through the wall in the van Earl came in and frees the trio, and then they drive away before the compound explodes. As they head for the refinery hoping to get there before Lois makes the exchange, Ronny explains that he had been hiding in the van ever since Earl left the mansion, not knowing what his father was planning to do but figuring that he might need help. Bernie then remarks that they are going to need help because Geoffrey will undoubtedly have reinforcements with him, so Frank has Ronny give him his cell phone so he can make a call.

Geoffrey arrives at the refinery with Carmen and a few henchmen, and he approaches the surprised Lois and orders her to hand over the briefcase with the cash in it before he gives her Carmen, but Lois refuses to comply until she gets Carmen first. Geoffrey takes out his handgun and prepares to shoot her for her defiance, but then Frank and company drive in. Geoffrey shoots at them several times, but all of his shots miss, and then the van hits him and breaks his right leg. Frank, Bernie, and Earl then get out and make short work of Geoffrey’s goons while Ronny frees Carmen, but then Broussard and his fellow crooked officers appear. After he criticizes Geoffrey for letting things get this far out of hand, Broussard walks up to Lois and takes the briefcase, and when Frank tries to stop him, he hits Frank in the face with it. He tells Frank that he messed everything up, and now he and everyone else are going to have to die for it. However, before he can shoot Frank first, Detective Williamson (Judd Lormand) appears – having been the person that Frank called and who was already suspicious of Broussard – along with his son Kyle (Colby Arps) and many other people armed with various guns, and he orders Broussard to surrender. Broussard refuses to back down and then tries to take Lois hostage, but she elbows him in the ribs to break free. Frank then shoves Broussard up against the back of Earl’s van, which causes his gun to go off into Frank’s fanny pack, and Frank proceeds to beat the snot out of him for it. Frank then discovers that he is unharmed; the bullet was stopped by the titanium pocket watch that Ronny had earlier given him as a gift. As the good guys celebrate, Geoffrey tries to get up, but Carmen delivers a knockout kick to his face.

Some days later, Frank and Bernie make ready to leave Earl’s mansion and return to Los Angeles since Bernie has a doctor’s appointment the next day. After they say goodbye to Carmen, Lois, and Ronny, Earl summons them both into his office for a moment. He first expresses his sincerest gratitude to them for saving his daughter’s life, then tells them that he has felt more alive now than in the last 30 years. Because of that, he has found his true purpose; he wants to work with them to bring back justice to places throughout the U.S. that have been completely drained of it. He also adds that he will fund the entire operation and put them both on salary, which will nullify the financial troubles that they have been having lately. He then asks Frank and Bernie if they are ready to clean up this country, and though the movie ends before they can give their answer, there is no doubt that they said “yes”. 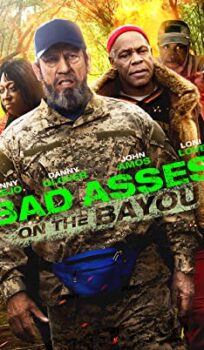