Spencer Tracy faces off against a collection of the biggest movie villains of the era.

The Superliner Express train stops in the small dusty Western town of Black Rock for the first time in 4 years. A one armed man, Macreedy (Spencer Tracy) gets off.  He is met with hostility and aggression by everyone in town, and has no idea why.  Macreedy is fulfilling a promise to a dying buddy in World War II, Komoko, to look up Komoko’s father and give him his son’s medals.  The town is dominated by tough guy Reno Smith (Robert Ryan) and his henchmen  (Lee Marvin, Ernest Borgnine).  Reno tells Macreedy that the father Komoko left town a long time ago.  However, when Macreedy goes to Komoko’s farm, he finds the farmhouse burned down and a grave that looks new.

The doctor reveals to Macreedy that Reno sold land to Komoko that Reno thought was dry and worthless.  Komoko successfully dug a well and was farming the land.  Reno was furious, particularly because Reno hated Japanese people.  Reno and his buddies went out to try and frighten Komoko off the land.  It ended up with Komoko dead and the house burned down.  However, now that Macreedy knows the truth, the bad guys decide he can not leave town alive.  Macreedy knows they plan to kill him after dark, but is stranded in this desert town with no way out.  The sheriff is scared of Reno and takes orders from Reno.  Macreedy tries to telegram for help, but the operator also takes orders from Reno.

At sunset, Liz (the sister of one of Reno’s gang) offers Macreedy a ride to the next town.  Outside of town, she pulls over in a ravine and runs away from the car.  It is a set up, Reno is waiting to shoot Macreedy.  Reno tells Liz that there can be no witnesses, and shoots her.  Macreedy hides behind the car.  Macreedy fills a bottle with gas from the car, and stuffs his necktie in the bottle to make a molotov cocktail.  When Reno approaches to see if Macreedy is dead, Macreedy throws the bottle, killing Reno in the explosion.  The next morning, Macreedy drives back into town with the 2 bodies in the car, and catches the train home. 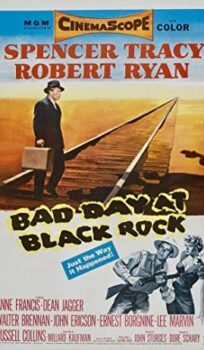