Over time, as Kathy (Janeane Garofalo) becomes more involved with the Peerless United girls’ soccer team that her daughter Jenna (Lauren Sudol) plays for, she also becomes increasingly swept up in the extremely competitive, soccer-obsessed culture that has gripped all of the parents of the other girls on the team. She also grows to despise the team’s coach, Nick (Christopher Titus), both because she believes that he bullies Jenna and because he hardly gives her any opportunities to play, plus she notices that he regularly treats his own daughter like she is the star of the team and gives her preferential treatment over all of the other players. Eventually, she finds that all of these things are causing her sanity to slowly deteriorate.

In a State Cup semi-final match, Jenna gets a chance to play, but Kathy is pushed even further to the edge when she gets more and more upset with Nick for constantly yelling and swearing at Jenna during the game, plus she has to listen to the other parents yell out all sorts of commands at their daughters. Peerless United ends up losing the game, and Kathy finds herself having a lot of trouble coping with the sight of Melissa (Cheri Oteri), Dan (Bill Sage), and Allison (Rebecca Budig) – three of her fellow Peerless United parents – attacking the obnoxious lineswoman, as well as the sight of Jenna walking off the field disappointed, plus she takes notice of the excessive cheering of the parents of the winning team. Meanwhile, the incensed Nick fires Gary (Michael Boatman) as his assistant coach, calling him incompetent in addition to calling his daughter a terrible player, and this finally wakes Gary up to the fact that Nick has never truly considered him and his daughter to be a part of Peerless United, and never will. Then, when Nick yells to Kathy that he blames his team’s loss on Jenna, Kathy finally snaps. Nick starts to walk towards her, likely to harshly criticize Jenna some more right to her face, and Gary pulls out a corner flag and starts walking towards Nick looking to do him some harm with it. Kathy walks up to Gary and meets him in the center of the field just as Nick reaches them, and she grabs hold of the flag with him.

The movie then returns to the opening scene, where we see Nick lying dead on the field with the corner flag impaled through him. We then see Kathy being escorted off the field by a police officer, and it is obvious that she took the flag from Gary and killed Nick with it. We also realize that she has been narrating this whole story from the psychiatric hospital that she is now imprisoned in. She tells the viewer that killing Nick freed her from all of that soccer-induced madness, and she happily adds that Jenna has now taken up lacrosse and is enjoying it. 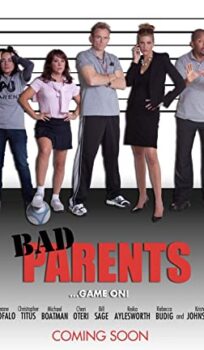