Ozzy, Barry, Frank and Derek are members of the Astro Investigation and Defense Service (AIDS) who are fighting an alien invasion in a small New Zealand town. The aliens have been using humans as a source of food for their intergalactic fast food chain.

Barry, Frank, and Ozzy defeat all the aliens in a shootout, and rescue a kidnapped charity collector who had stumbled on to the town. Derek falls off a cliff and spends the rest of the movie trying to stop his brain matter from falling out of a hole in his head.

The alien leader escapes, but Derek stows on aboard the ship; he kills the leader with a chainsaw, puts on his skin, and declares that he’s “coming to get you bastards”. 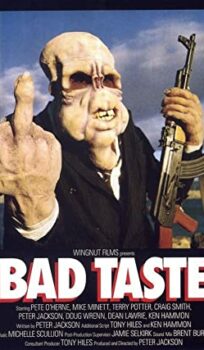