Pooper:
Chris makes it to New York and proposes to Maria. She rejects him, in large part because he caused her art exhibition to be destroyed. That said, the journey helps to solidify Chris’ friendship with Bud.

Long Ending:
This film is shot in hidden camera style, with the actors performing their scenes amidst real people who are unaware they are shooting a movie (similar to Borat).

Chris Carey (Eric André) works dead-end jobs in Florida. One day, a beautiful woman named Maria Li (Michaela Conlin) who went to high school with him stops in his shop. Chris immediately falls in love with her. He asks Maria out for coffee, but she says she is on her way back to New York City where she’s opened an art gallery. She offers to show him around the City should he ever make it there. Chris misconstrues her offer as Maria reciprocating his romantic feelings. Chris performs a musical number in a mall and public park to celebrate his love. He convinces his best friend Bud Malone (Lil Rel Howery) to drive with him to New York so he can propose to Maria. They take a car belonging to Bud’s sister Trina (Tiffany Haddish) as she is currently in jail.

On the trip to New York, Chris and Bud wreak havoc wherever they stop. Amongst other things, they almost cause an explosion at a gas station, have explosive vomit in a country bar, get assaulted by a gorilla in a zoo, have a drug trip in a grocery store, and get their penises stuck to each other in a Chinese Finger Trap. Meanwhile, Trina breaks out of jail and discovers her car is gone. She pursues the duo, intending to kill them for stealing her car. She expresses her murderous desire to many people she meets along the way.

When Bud finally learns that Trina is free and in pursuit, he tries to return to Florida. The friends fight and get into a fiery car crash, totaling Trina’s car. Bud and Chris have a falling out and part ways. After a military recruiter consoles Chris, he finds Bud at a bus station and makes a grand apology to him in front of many bystanders. Bud decides not to abandon his friend, and the pair complete their journey to New York.

Chris makes his way into the opening of Maria’s art gallery where he professes his love to her. Although she is flattered by the gesture, Maria rebuffs him as they don’t know each other at all. Suddenly, Trina drives a car through the wall of the building and destroys many of the art installations while trying to kill Chris. She eventually chases the pair to the roof of a nearby building and hangs Chris over the ledge (again in front of an unknowing crowd who beg her not to kill him). Bud arrives and finally stands up to his sister. Impressed that he’s finally showing a backbone, Trina decides not to kill them. Instead, she punches Bud in the face and calls it even. Chris returns to Maria’s museum to apologize, and she angrily chases him off.

To thank Bud for sticking by him, Chris recreates Bud’s favorite movie “White Chicks” by having he, Bud, and Trina dress as white people in drag and infiltrate a party with a lot of wealthy people.

As the credits roll, we see scenes of Eric Andre revealing to various people that they were on hidden cameras and see alternate takes of some of the bits from the film. 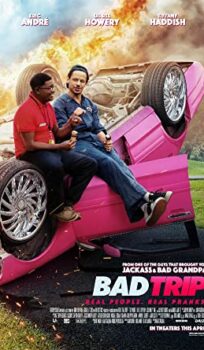