While on holiday in America, a German tourist Jasmin (Marianne Sagebrecht) walks away from her husband and checks into the motel at the Bagdad Cafe. Brenda the owner (CCH Pounder) is suspicious at first, but soon they become fast friends. Jasmin brightens the lives of everyone she meets, including an artist played by Jack Palance (whose wardrobe can only be described as cowboy/hippy). He paints many portraits of her where she becomes progressively more naked. Things look like they will end when her visa is near expiration but Jack Palance offers to marry her. The movie ends with Jasmin saying she will talk to Brenda. 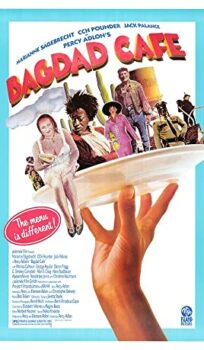