SHORT VERSION:
Bill wins the Paradise Lake Invitational over Hot Rod after his son Scott exposes Hot Rod for cheating and gets him disqualified (Hot Rod also gets slapped with a lifetime suspension from pro bass fishing). Bill uses the $50,000 grand prize to pay off the mortgage on his bait shop and buy a brand-new fishing boat, and his bait shop experiences an inundation of customers thanks to his new celebrity status. It is also mentioned in passing that he will be competing in next year’s pro bass fishing tour.

LONG VERSION:
When Bill (Bill Engvall) returns to the tournament grounds at the end of the first day of the Paradise Lake Invitational, he accidentally crashes his boat into the dock and sinks it. After the P.B.A. chairman warns him that he cannot use another boat tomorrow and will be disqualified if he can’t get his boat afloat by then, Bill considers himself beaten. That night, Laura’s (Mary Rachel Dudley) father Jack (Harve Presnell) meets with Bill and offers him a $15,000 check so he can pay off the mortgage he owes the bank on his bait shop, and Bill pockets it after Jack reminds him that his shop is doomed no matter what (Hot Rod [Billy Ray Cyrus] opened his own fishing store right across the street from his and is drumming up huge business). Jack informs him that his offer to work at one of his mattress stores still stands, but he will be put in a menial position if he accepts (wanting to just get Bill under his thumb, since he never liked him), and he also says that he will be looking after Laura and Scott (Vincent Martella) financially from now on.

As Laura is driving home with Scott, Scott spouts off one of Hot Rod’s many rules on life that he learned while hanging out with him, and Laura sternly tells him that a man like Hot Rod is not to be idolized and that he ought to start showing a little respect for the honest, hard-working man that is his father. Laura also greets Bill when he returns home, and they patch up their differences over him withholding the information on his debt from her. Meanwhile, as Bill’s friends Odd Job (Christopher Schmidt), Dale (Rus Blackwell), Betty (Maureen Preuss), Gus (Richard Riehle), and Melvin (Wilbur Houston) are out drinking at a bar with Hot Rod, Bill’s mentor Buddy (Billy Joe Shaver) comes up to them and scolds them for abandoning Bill, then reminds each of them of how good of a friend he has been and that they should help him win the tournament. After they reject Dale’s suggestion to blow up Hot Rod’s cabin cruiser, the gang opts to retrieve and repair Bill’s boat.

The next day, Bill returns to the tournament with his wife and son, but the P.B.A. chairman reminds him of the rule regarding his boat, after which Jack shows up and rubs Bill’s failure in his face. Suddenly, Bill’s friends get his attention and show him the fixed boat, and they apologize for taking his friendship for granted. Jack objects to Bill using the boat, but the chairman gives Bill the green light to compete since there are no rules forbidding participants from repairing their boats. When Jack reminds Bill of their agreement, Bill takes out the check and rips it up, and Laura pushes her father into the lake for good measure. Hot Rod sees this from afar with Scott, and he insults Bill and shows scorn for the values of integrity and hard work before heading out, spurring Scott to officially ditch him and root for his father. Just before Bill departs, Buddy approaches him, and when Bill complains that he has no gear to fish with, Buddy replies that the Bill Dugan he knew didn’t need fancy equipment to be a good fisherman. When Bill still expresses self-doubt, Buddy gives him a small box and tells him not to open it until he gets out on the lake.

After Bill ventures out and anchors himself in a spot, he finds the box contains a message Buddy earlier imparted to him: “Dance with who brung ya.” Bill soon gets the message and uses a lure that he hasn’t used since his amateur champion days, and he really starts to reel in the fish. While fishing on the far side of the lake later on, Odd Job radios him and informs him that he ought to start heading back now since he only has 20 minutes left, so Bill decides to cast out the lure one last time. He succeeds in hooking himself a huge bass, but he fights to get it into the boat, and it seems like he was unable to do so in the end.

Bill returns to the tournament site at the same time as Hot Rod. After Hot Rod’s catches are weighed and he is confirmed as the first-place angler, Bill has his fish weighed, but then he produces the huge bass, having managed to catch it after all. The weight of it causes the total weight of his load to surpass Hot Rod’s, and he is thus declared the winner. However, Hot Rod says that it isn’t over, and he has one of his groupies bring him another bag that contains a big bass. The weight of it puts him back into first place, but Scott recognizes this particular bass as the one he himself caught while fishing with Hot Rod a couple of days ago. He lets the chairman know about this, and as evidence, he shows a photo that he captured on his phone of him and Hot Rod with the fish and points out the identical markings on the tail. The chairman tells Hot Rod that he is disqualified for cheating and banned from pro bass fishing for life, and he affirms that Bill is the new champion and $50,000 richer. Hot Rod soon threatens Scott with physical violence for exposing him, prompting Bill to floor him with a punch to the face. As Hot Rod gets up and walks away, he yells that they haven’t seen the last of him and nobody messes with him, but then his cabin cruiser suddenly explodes. Bill’s friends quickly figure out that that was Dale’s handiwork.

In the days that follow, Hot Rod’s fishing store is closed down, and Bill’s shop is looking spiffier and getting an inundation of customers thanks to his new celebrity status, plus it is mentioned in passing that he will be participating in next year’s pro bass fishing tour. Betty and the mail carrier Roy (David Mackey) also become an item, and they head off to Miami for a three-day vacation. Bill later goes fishing with Laura and Scott in a brand-new boat. 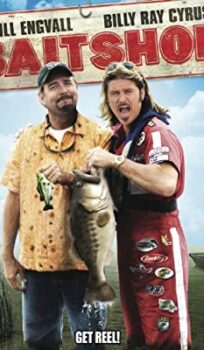