Nightclub singer Sugarpuss (Barbara Stanwyck) hides out from the police by moving in with 8 professors who are busy compiling an encyclopedia – she’s there to help them with update their slang vocabulary.

In an attempt to secure her hide out, she professes love to one of the professors, Bertram (Gary Cooper), who in turn proposes marriage.

In the end, she realizes she loves Bertram, but not before he discovers that she has been conning them all.  Her mob boss boyfriend has the professors held at gunpoint so that she will go through with marrying him (thus ensuring she can’t testify against him in court).

Bertram, realizing she loves him, rallies the professors and rescues her. 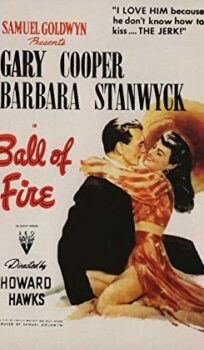