The dogs win the race, but Balto senses that something happened to Duke and his plane. His suspicions are confirmed by the two polar bear cubs and with them and Stella, he goes off in search of the pilot. Kodi refuses to help saying that his job was threatened by the pilot and his plane. Kodi has a change of heart however after a lecture from Jenna who scolds him for valuing his job over a human life.

Balto, the cubs, and Stella contend with soft snow, a raging river, and a moose to reach the downed plane. They retrieve Boris and take him home while Balto stays to revive Duke. Using a make-shift sled made from the lid of the plane’s mail cabinet, Balto pulls Duke back to Nome, but almost falls down a canyon after an ice bridge collapses. Kodi and the other dogs from the mail-dog team arrive to save them and they return to Nome together as heroes.

Boris finally is explain himself to Stella, saying that he’s afraid of heights. She forgives him, they make up, and begin their relationship anew. Duke builds a new plane named after Balto and takes him for a ride, fulfilling Balto’s dream of flying. 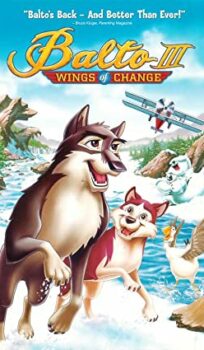