Balto (voiced by Kevin Bacon), after a meeting with a white wolf while guiding the dog sled team carrying the antitoxin back to the diphtheria-stricken children of Nome, decides to take the advice of his friend Boris (voiced by Bob Hoskins): Rely on his wolf instincts and not his dog instincts to guide the dog sled team back to Nome. Balto gets the team and the medicine back to Nome safe and sound. Steele (voiced by Jim Cummings), who lied about Balto dying and the loss of the medicine, quickly becomes shunned by all the dogs in town in favor of Balto.

The antitoxin is administered in time to save the lives of the children, more specifically Rosie (voiced by Juliette Brewer), the owner of Balto’s love interest Jenna (voiced by Bridget Fonda). Balto finally earns the respect of the townspeople for his heroism, and Rosie even says to Balto as she hugged him “Balto, I’d be lost without you.” He and Jenna then nuzzle together in front of the appreciate townsfolk, with Star (voiced by Robbie Rist) mentioning that a statue should be made of Balto. 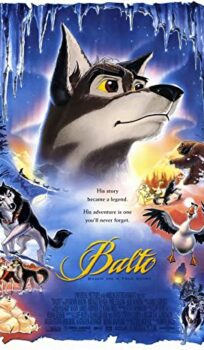