At the end of winter, Bambi’s mother takes him out to the meadow for the first grass of spring. When she senses man, she warns Bambi to run back to thicket as fast as he can. We hear a gunshot, and after returning to his home, Bambi realizes his mother is not behind him. While he is looking for her, his father the Great Prince tells him that she cannot be with him any longer.

We jump forward to maturity. Bambi, Thumper, and Flower have all grown to adults and it is mating season in the forest. Thumper and Flower easily find mates, while Bambi reunites with a grown Feline. He defeats a jealous buck to claim Feline as his mate, and later comes out from their hiding place when he senses danger. He meets the Great Prince at the summit, and is told that man has come back, as they overlook man’s campground, with several tents and smoke coming up from a campfire. The birds flying toward the forest signifies that man is on the hunt again.

The Great Prince orders Bambi to follow him deep into the forest, but Bambi goes back for Feline, who has woken up hearing the birds overhead. She leaves to find Bambi just as Bambi returns to look for her. While the search is on, Feline encounters several of man’s hunting dogs, who corner her at the cliff, but Bambi comes to save her. As Bambi tries to run away, he jumps a small gorge, and is shot. He lands and falls on the other side, about to give up. We then see man’s campfire was never put out and is quickly spreading to the rest of the forest. The Great Prince finds Bambi and tells him that he must get up. Bambi realizes that his injury is very light, and follows the Great Prince as they narrowly escape the forest fire along with most of the other inhabitants, including Bambi’s friends and Feline.

Some time later, Friend Owl is awoken by the forest animals rushing to the thicket to see the Prince’s (Bambi’s) recently born. When they arrive, the find that Feline has had not one, but two fawns. The scene plays out as it did in the beginning of the movie with Bambi’s birth, only this time it is Bambi who stands atop the rock watching down, as the Great Prince steps aside. 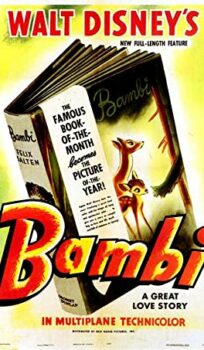