Manray (Savion Glover) eventually comes to dislike doing the Mantan show, so before a TV taping one night, he tells Pierre (Damon Wayans) that he won’t perform in blackface anymore. He then goes in front of the studio audience and does his tap dance number in his regular attire, which results in Dunwitty (Michael Rapaport) firing him from the show.

After being thrown out of the studio, Manray is kidnapped by the Mau Maus, a militant rap group led by Sloan’s (Jada Pinkett Smith) brother Julius (Mos Def) that despises the Mantan show. They take him to a secret location and plan to publicly execute him on a live webcast. Though the police try to track down the source of the Internet feed, the Mau Maus nevertheless kill Manray as they make him do his tap dancing. Later on, the police assault the Mau Maus’ hideout and kill all but the group’s lone white member.

Grief-stricken over the deaths of Manray and Julius, Sloan confronts Pierre (who is in blackface, mourning Manray’s death) at gunpoint in his office and orders him to watch the videotape she made of assorted racist cartoons, movies, TV shows and newsreels from the first half of the 20th century, which she gave to him earlier on to try to shame him into cancelling Mantan. Pierre puts the tape in, and after watching some of the footage, he tries to get Sloan to hand over the gun. When he grabs hold of it, she pulls the trigger, shooting him in the stomach. Pierre takes the gun away from her, and Sloan tells him that it was his own fault that he got shot, and then she flees. Pierre positions the gun to make it look like he shot himself, and continues to watch the tape as he dies.

The movie closes with a long montage of the material on the tape, and it finishes with Manray smiling in his Mantan attire while the studio audience laughs at him. 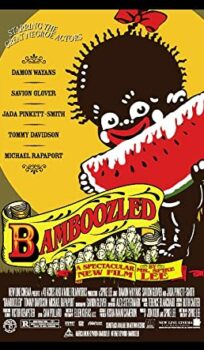