While Clark Gable, Sidney Poitier and the rest of the crew deserve credit for trying to make a statement against racism, it is easy to see why this pedantic preachy movie has been largely forgotten.

Amantha Starr has grown up as the rich pampered daughter of a Southern plantation owner.  When her father dies suddenly, Amantha is surprised to learn that he had borrowed large sums of money from a slave trader, and the plantation is now the property of that slave trader.  More shocking is the news that her real mother was a light skinned slave on the plantation.  Although her widowed father raised her, under the law as the daughter of a slave woman she is also a slave.  The slave trader takes her to New Orleans to be sold, expecting a high price for this beautiful young lady.

In New Orleans, Amantha is bought quickly by Hamish Bond (Clark Gable), as he does not want to see her pawed and inspected by the men there.  Hamish treats her as a guest in his house.  Rau Ru (Sidney Poitier) is the black overseer who runs Hamish’s businesses.  He has several lengthy monologues in which he explains how the “kind master” is a false myth, and it is still terrible to be a slave.  Eventually, Amantha falls in love with Hamish and stops trying to run away.  Rau Ru despises her for siding with the master.  When the civil war breaks out, New Orleans is occupied by Northern troops.  Hamish burns his warehouses, so the material will not fall into Northern hands.  Hamish is sentenced to death, with a big reward to anyone who captures him.

Rau Ru knows where Hamish is hiding out in the swamps.  Rau Ru captures Hamish and turns him over to the Northern soldiers for the reward.  Rau Ru realizes that if he gives in to hatred and revenge, it will harm himself, not his enemies.  Rau Ru helps Hamish and Amantha to escape together.  They board a ship to go live on Hamish’s property in the West Indies. 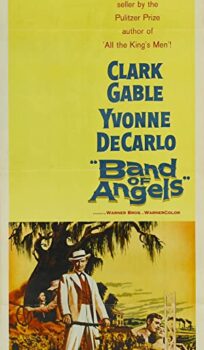