When the crowd chooses to have Barabbas released instead of Jesus, Barabbas (Anthony Quinn) is more surprised than anyone.  He goes back to his band of thieves, but is upset to discover his lover has become Christian and she wants nothing to do with him.  Everyone he meets reacts to him as the man who was freed instead of Christ, which upsets him greatly.  His gang rob some wealthy travelers.  Barabbas recognizes one of the chief priests who called for his release and begins to beat the man insanely.  The gang escapes, but Barabbas is caught.

Barabbas again is sentenced to death.  Pilate remembers him and decides that it is unfair for him to be sentenced to death twice.  Instead, Barabbas is sent to work as a slave in the salt mines.  Most slaves die within 2 or 3 years, but Barabbas survives 20 years down there.  There is a cave in at the mine.  Because Barabbas knows the mines so well, only he and the man chained to him (a Christian named Sahak) survive.

Since Barabbas survived 2 death sentences, 20 years in the mines, and the cave in, the wife of the Roman governor considers him a good luck omen.  When they return to Rome, they take Barabbas and Sahak for luck.  Sahak is too vocal about his faith, and he and Barabbas are sentenced to fight in the colosseum.  By luck, Barabbas kills top gladiator Torvald (Jack Palance).  Barabbas is again freed by Nero.

Barabbas takes Sahak’ body to the catacombs to have a Christian burial. Returning from the catacombs, Barabbas finds Rome burning. Believing that it is the fire of God, Barabbas grabs a torch and starts lighting things on fire.  He is arrested and thrown in a cell full of Christians.  They are angry, because his actions make it look like the christians were burning Rome.  St Peter is in that cell, and Peter is kind to Barabbas. Peter explains to Barabbas why Christ had to die.

Barabbas dies at peace, as a Christian. 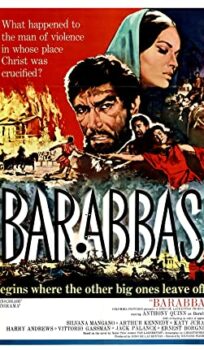