SHORT VERSION:
The Milwaukee Beers beat the Dallas Felons for the Denslow Cup after Coop (Trey Parker) scores the winning basket using a ball that Joey (Trevor Einhorn) and Jenna (Yasmine Bleeth) created for him from pieces of a Barcalounger, after he popped his La-Z-Boy ball before taking his shot.

As the Beers celebrate, Coop kisses Jenna, and Remer (Matt Stone) makes out with Yvette (Jenny McCarthy), who earlier ended her alliance with Felons owner Cain (Robert Vaughn). Coop also meets and chats with his idol Reggie Jackson (himself) and gets wished good luck by him for next year. Remer embarrasses Cain with one of his psyche-out props, and then he and Coop take their victory lap around the arena with the Denslow Cup, with Squeak (Dian Bachar) sitting atop it.

LONG VERSION:
After finding out about how Coop has the hots for Jenna and how she works for the Dream Come True Foundation, Cain hatches a plot to ensure Yvette ownership of the Milwaukee Beers.

First, he manages to convince six members of the foundation’s board of directors – whom he knows personally – to cut the funding, which Jenna tearfully tells Coop and Remer about after the Beers make it to the playoffs. After she runs off, Cain comes up to them and proposes that the Beers start up a clothing line, with all of the proceeds going to Jenna’s foundation. Coop is completely against it, but Remer – as part team owner – agrees to it, mainly to try to impress Jenna since he has the hots for her as well. The clothing gets made, and Remer attains newfound fame because of it, which goes to his head and strains his and Coop’s friendship.

After the Beers win the semi-finals, Cain comes up to Coop and Remer in the locker room and shows them pictures revealing that child sweatshop workers in Calcutta are putting the clothing together. Knowing that the photos would ruin both the Beers and Jenna’s foundation if released to the public, Cain tells them that he won’t release the photos if they both miss the Denslow Cup game against his Dallas Felons. He then takes his leave, and moments later, an angry Jenna shows up with her own copies of the photos. Though Coop tries to put the blame on Remer – and vice-versa – for the whole mess, she tells them that she doesn’t want anything to do with either of them anymore and leaves. Coop and Remer then have a falling out.

Coop immediately flies out to Calcutta and visits the sweatshop, and he replaces the child workers with adult ones. He makes it back just as the Denslow Cup game is starting, but Remer still won’t talk to him. The Beers perform abysmally for the first six innings, and by the time the seventh inning stretch rolls around, the Felons lead 16-0.

Meanwhile, Jenna notices that the foundation’s kids are watching the Denslow Cup game and changes the channel to an episode of Unsolved Mysteries. The show presents an update on Coop (who was classified on a previous episode as a missing person since he left for Calcutta without anyone’s knowledge), and footage is shown of how he fixed the sweatshop problem. Feeling that Coop has completely redeemed himself, she heads for the game with the kids in tow.

During the seventh inning stretch show, Coop and Remer get into a big fight, prompting Squeak to step in and stop it. He makes a moving speech where he says that BASEketball, more than anything else, is about getting together with your friends and having a good time, and if they couldn’t be friends, then the heart and soul are out of this game. Knowing that Squeak is right, Coop and Remer patch things up, and Squeak’s words also cause Yvette to break off her alliance with Cain.

The Beers make a roaring comeback over the remaining two innings, and by the bottom of the ninth, the score is now 16-14 for the Felons. Remer and Squeak are on bases, and Coop is selected to take the final shot. However, as he is preparing for it, his custom-made La-Z-Boy BASEketball pops. He calls for a time-out to get another ball to shoot with, and a short time later, Jenna and the kids show up, and Joey presents Coop with a new custom-made ball that he and Jenna put together from pieces of a Barcalounger. Coop takes the shot with it and misses, but he successfully completes the conversion, making it a home run and winning the Denslow Cup for the Beers.

As the team celebrates, Coop kisses Jenna, and Remer starts making out with Yvette. Reggie Jackson – Coop’s idol – then comes up to Coop and chats with him for a bit, and Coop tells him that it is because of him that he’s here playing BASEketball. Reggie thanks him for the compliment, gives him the popped La-Z-Boy ball, and wishes him good luck for next year. Remer embarrasses Cain with one of his psyche-out props, and then he and Coop take their victory lap around the arena with the Denslow Cup, with Squeak sitting on top of it. 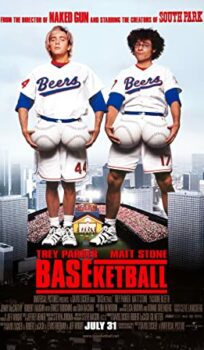