Pooper:
Batman reaffirms his friendship with Robin, helps Harvey Dent repress the Two-Face persona once and for all, and agrees to participate in Harvey’s charity bachelor auction (where Catwoman wins the bid for a date with him).

Long Ending:
Dedicated to Adam West, the “Bright Knight,” as this was his final work.

The movie opens on Batman (voiced by Adam West), reading poetry to Catwoman (Julie Newmar) in her jail cell while she is serving time for her prior misdeeds. After he is finished wooing Catwoman, Batman and teen-sidekick Robin (Burt Ward) drive to the laboratory of Dr. Hugo Strange. Dr. Strange developed a machine that can extract the evil out of villains (the evil is distilled into a green gas). Batman, Robin, and district attorney Harvey Dent (William Shatner) are invited to witness him use the machine for the first time. Dr. Strange and his assistant Harleen Quinzel brings in Riddler, Joker, and Penguin to extract their evil. But the sheer amount of evil is too great and the machine explodes, letting the gas leak out into the room. Batman manages to shield everyone except for half of Dent’s body. The half of Dent’s body exposed to the gas is infected by the evil gas and Dent becomes the villain known as Two-Face.

Six months later, Batman and Robin have ended Two-Face’s reign of terror, gotten plastic surgery for Two-Face to restore him to Harvey Dent, and Dent has been deemed rehabilitated. Bruce Wayne refers to Dent as his best friend, much to Dick Grayson’s jealousy. Dent restarts his career as a District Attorney. Meanwhile, the dynamic duo tangle with King Tut and Bookworm. The pair deduce that another mastermind is behind Tut and Bookworm’s schemes, and Robin suspects it is Two-Face. Batman and Robin get into a heated argument about Harvey Dent, with Batman sending Robin to his room for his insolence (much to Alfred’s (Steven Weber) chagrin).

Robin sneaks out and follows Harvey Dent to a hideaway where he witnesses Dent meeting with Two-Face. It turns out Two-Face has captured Dr. Strange and has had Strange rebuild his evil extractor. Two-Face has been manipulating the criminals to commit new crimes so they can be arrested and prosecuted by Dent, allowing Dent to rebuild his law career. In return, Two-Face has been extracting the evil from the newly incarcerated criminals like Bookworm and King Tut. Meanwhile, Catwoman escapes from prison after getting angry that Batman has stopped visiting her (Batman is too consumed with trying to stop the recent crime sprees to visit). To effectuate her escape, she knocks out and switches places with defense attorney Lucilee Diamond (Lee Merriwether).

Two-Face discovers Robin spying on them and exposes him to the evil gas. Batman is forced to confront and capture the now-evil Robin. With help from the Bat-Computer, Batman synthesizes an antidote and cures Robin of his evil ways. The dynamic duo head off to confront Two-Face, but are captured by him and put into a death trap. Two-Face then reveals that he is, in fact, Harvey Dent. It turns out that while the cosmetic surgery cured Dent’s facial scars, the Two-Face personality continued to exist within Harvey Dent and is able to manifest via a Dr. Jekyll/Mr. Hyde transformation. Two-Face unmasks the heroes as Bruce Wayne and Dick Grayson. He then arranges for all of Gotham’s criminals to publicly bid for the heroes’ identities (including Joker, Penguin, Riddler, Egghead, Mr. Freeze, Catwoman, and Shame). When the villains arrive at the auction, Two-Face secretly extracts their evil from them. Two-Face then departs to pursue his true villainous plan.

The dynamic duo manage to escape the death trap with Catwoman’s help before the other villains unmask them. They defeat the villains and send them to jail. The heroes then realize that Two-Face has stolen a plane and is dropping the evil gas extracted from all the villains over all of Gotham City (turning all the residents evil). The inhabitants of Gotham begin turning into evil versions of themselves, including Chief O’Hara (Thomas Lennon). Batman and Robin manage to crash Two-Face’s plane into an oil refinery. Batman goes in to the refinery to save Two-Face before the refinery explodes, but not before explaining to Robin that Robin/Dick Grayson will always eternally be his best chum and trusted crime-fighting ally (thus allaying Robin’s jealousy). Batman confronts Two-Face and manages to help Harvey overcome the Two-Face personality once and for all. The two escape in the nick of time. Batman and Robin then spray Gotham with an antidote, restoring all the residents to their law-abiding selves.

The film ends with Harvey having been released from jail, this time truly rehabilitated. He is holding a bachelor charity auction. The first bachelor on the block? Batman himself (never turning down an opportunity to help a friend or a good cause). And the first person to place a bid on a date with the Dark Knight? Catwoman! 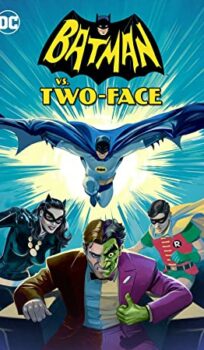