Emmett (Lou Diamond Phillips), Sheila (Dina Meyer), and Jimmy (Leon) get to the mine where all of the bats are resting, and they find the dead bodies of military personnel and their equipment strewn about near the mine’s sole entrance. They then notice a huge inactive cooling unit that had been placed down in the mine by the soldiers, which was to be used to freeze the bats to death, as well as explosives placed around the entrance to seal it and trap them in there.

The trio contact Major Reid (Ned Bellamy), who informs them that because this attempt to kill the bats has failed, he was sending an air strike in an hour to blow up and gas the mine. Knowing that the bats would scatter if that happened, the trio opts to disobey the Major’s orders to leave the area and try to get the cooling unit running. Emmett and Sheila go down into the mine to do that while Jimmy remains on the surface to detonate the explosives on the entrance once they got back out.

Emmett and Sheila get the unit running, but then they come under attack from the bats, and they flee for the surface with most of the bats giving chase. As they reach the exit, Sheila orders Jimmy to set off the explosives, and he does so just as she and Emmett get out. The explosion incinerates the bats pursuing them, and all of the other bats in the mine eventually freeze to death. Jimmy then calls Major Reid and tells him to call off the air strike, which he does after getting satellite confirmation of the mine’s sealing.

Later on, a lone surviving bat digs its way out of the ground, but is killed when Emmett (unknowingly) runs it over with his truck as he, Sheila, and Jimmy are driving away. 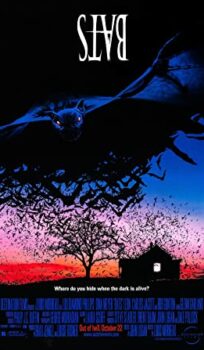