Cliff (Patrick Wolfe) and Egan (Burr DeBenning) spot a large group of Japanese soldiers on their reconnaissance mission and report to Captain McDonald (Cornel Wilde). On hearing how the Japanese army has helmets and gear similar to their own, McDonald realizes they plan to storm the beach, pose as U.S. troops and attack from behind. McDonald orders an air strike and tells the two to retreat.

The air strike decimates the Japanese force and prevents the attack. The Japanese commander commits Seppuku, ritualistic suicide, for his failure.

Just as Cliff and Egan think they are home free, they are confronted and shot by a Japanese spotter whose friend they had killed earlier. Egan is killed while Cliff and the Japanese solider are gravely wounded. Cliff sympathizes with the man, offering him water. Just as the Japanese solider is about to give Cliff something, he shot and killed by Cliff’s fellow soldiers. As he is given medical attention, Cliff weeps not just for Egan but for the dead soldier he was bonding with just moments before. 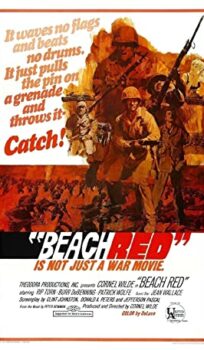