David Langley (Peter MacNicol) learns from Mr. Bean (Rowan Atkinson) that he is not really a doctor of art and knows nothing about art, and Bean then eventually causes irreparable damage to the Whistler’s Mother painting. When David sees it, he thinks his life and career are over. He and Bean go out drinking, and return home to find David’s wife Alison (Pamela Reed) and his kids there, and Alison tells David she might have to leave him. As a sad Bean sits in the kitchen some time later, David’s son Kevin (Andrew Lawrence) comes in and talks to him, and through his mentioning of posters Bean gets the idea to replace the original painting with a poster of the painting and make it look like the original to save David’s career. He immediately puts his plan into action and pulls it off.

The next morning, Bean and David head to the art gallery for the ceremony, and come presentation time David sees the painting and is thrilled (though he was quite disappointed when he learned what Bean did to fix the damage). Bean then makes his speech about the painting on the spot, since he did not prepare one, but it wins over everybody when he talks about how, based on the time he spent with David and his family, families are important, and that Whistler did the portrait because it was his mother and he must’ve thought the world of her to do it. After David questions Bean about the whereabouts of the original painting afterwards, he is pulled aside by Lt. Brutus (Richard Gant) before Bean can answer. He learns his daughter Jennifer (Tricia Vessey) was in a motorcycle accident, so he and Bean go to the hospital. Lt. Brutus leaves them while en route to deal with a criminal, and while they are driving away a gunshot rings out. David shucks off Bean at the hospital, frustrated by him being a walking catastrophe in all the time they’ve been together, and says he needed to look after his family.

During his time there, Bean gets mistaken for a doctor due to his nametag, but he saves the life of Lt. Brutus, who was the one shot in the aforementioned altercation. Then, Bean, his identity concealed by his surgeon’s mask, is sent to the injured Jennifer’s room, where she laid in an in-between-type state of unconsciousness and a coma. He comically manages to awaken her, and when David and Alison thank him and say they would do anything for him, Bean reveals himself and asks to stay in Los Angeles for another week.

Bean sees a lot of Los Angeles and has some good times with the Langleys before he has to go home. At the airport, David tells Bean he’ll miss him, and the two exchange hugs. It last shows Bean about to go to sleep back at his home in England, some of his room adorned with pictures of him and the Langleys, and he looks at the wall across from him where the original damaged copy of the painting now hangs. He goes to sleep with a smile on his face. 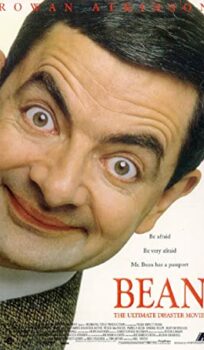