Dr. Nate Samuels (Idris Elba) brings his two daughters, Meredith and Norah (Iyana Halley and Leah Jeffries), to Africa for a safari vacation. There is some animosity between Meredith and her father because he was not there for their mother when she was dying from cancer. They are joined by Nate’s friend Martin Battles (Sharlto Copley), who guides them on the safari. Their trip soon becomes one for survival when they are in the presence of a vicious and bloodthirsty lion that kills without provocation after its pride was slain by poachers.

Nate keeps the girls safe while also helping Martin get away from the lion. They are found by other poachers, who turn on them because they recognize Martin as an anti-poacher who has killed their men. The lion kills the rest of the poachers while Nate gets the girls to safety in the poachers’ van. Martin sacrifices himself in an attempt to blow up the lion with him, but the lion survives.

Nate stops somewhere to tend to Meredith being wounded by the lion, and the creature eventually finds them. Nate leads the lion out into a field near a pride of other lions that Martin raised, leading to Nate fighting the lion himself before the other lions from that pride attack it and tear it to shreds. Nate is recovered by Martin’s friend Banji and brings him and the girls to safety. 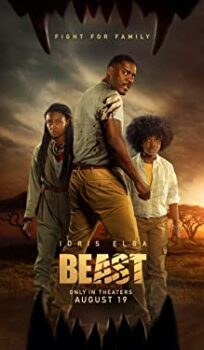