Pooper:
The boys eventually abandon the crazed Commandant and are taken into a shelter for boys orphaned by the war. Although his fate is left uncertain, it is implied Agu will be able to recover from his experiences as a child soldier.

Long Ending:
Agu (Abraham Attah) is a young child around ten growing up in Africa. Although his family is impoverished, he enjoys life surrounded by his parents, siblings, and friends. His father is a well-respected and honorable leader of their town.

One day, the town learns that the government has been attacked by a rebel group. Many of the townsfolk flee to the capital in hopes of finding protection there. Agu’s dad (who wants to stay behind to look after those who remain) manages to pay a man to drive his wife and two youngest kids to the city, but the man refuses to take Agu or his older brother. The mother and younger siblings are never seen again.

Agu is found by a contingent of rebels led by an older man referred to only as the Commandant (Idris Elba). The contingent is primarily made of teenagers and children like Agu. The Commandant promises to help Agu get revenge on the government so long as he proves himself worthy and joins their forces. Agu survives a rigorous training and initiation process (and the kids that fail to pass are killed by the rebel leaders). Ultimately, Agu is inducted as a soldier into the Commandant’s army. He strikes a friendship with another boy his age named Strika (Emmanuel Nii Adom Quaye).

The Commandant forces Agu to murder innocents, engage in battle, take drugs, and encourages the children to rape any women they find. The Commandant also sexually assaults both Strika and Agu. In monologue, we learn that Agu bemoans the things he is made to do. On one particular mission, Agu and his compatriots find a mother and daughter who a drugged Agu mistakes for his own. When he realizes they are not his mother and sister, he mercy kills them as his compatriots were in the process of raping and beating them.

The children eventually surrender and are taken to a facility to rehabilitate child soldiers. Some of Agu’s fellow “soldiers” decide to abandon the facility and seek out a new military leader to join up with. Agu decides to stay, but is largely withdrawn and silent. When a social worker meets with him, Agu explains that he is worried that when he tells her what he’s done, she will view him as nothing more than a beast or a devil. However, he remembers that he once had a family that loved him and that he wants to find happiness again. The film ends on a hopeful note, with Agu finally joining his fellow children at the facility in playing in the ocean. 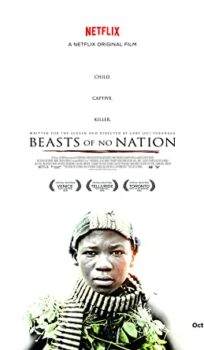