The inhabitants of the Bathtub are forcibly evacuated after the flood, but escape and return to their homes.

Knowing her father is dying, six year old Hushpuppy leaves in search of her mother.  She and her friends swim to a boat which takes them to a ship that appears to be a bar or strip club.  Hushpuppy meets a waitress there who may be her mother, though the woman doesn’t recognize her.  She wants to stay but the waitress tells her she can’t take care of her.

Hushpuppy and her friends return home, where she confronts the prehistoric beasts freed from the ice caps (it’s not clear if they’re real or in her imagination) and tells them she recognizes them as friends, but she needs to return to where she began.

She is with her father when he dies, and lights his funeral pyre, standing in solidarity with the other residents of the Bathtub. 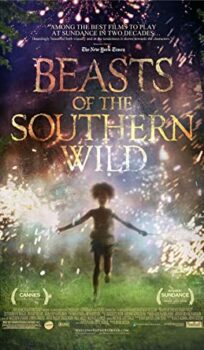