Longer version:
Beau (Gary Cooper), Digby (Robert Preston) and John Geste are orphan brothers who were raised by their Aunt, Lady Brandon.  Lady Brandon owns the “Blue Water Sapphire”, the largest and most valuable sapphire in the world.  Lady Brandon’s husband is a big spending playboy.  He has squandered all their money, and they will have to sell the sapphire.  When it is being shown for a last time, the jewel disappears from a room full of people.  Each of the Geste brothers disappears, each leaving behind a note claiming he alone was responsible for the theft.

The brothers join the French Foreign Legion, and serve in North Africa.  Beau dies in the siege of Fort Zindernauf.  John returns to England with a final letter for Lady Brandon.  In that letter, Beau reveals his motive.  Beau had been hiding as a child, and overheard a conversation.

Beau knew that years ago Lady Brandon already sold the jewel to cover her husband’s expenses, and kept a cheap imitation.  To protect Lady Brandon from her abusive husband finding out what she had done, Beau stole the fake jewel. 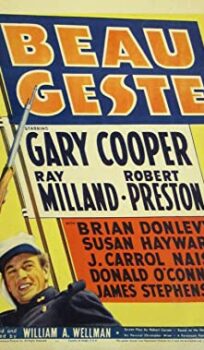