Beauty and the Beast: The Enchanted Christmas(1997)

Forte tricks Belle into leaving the castle grounds and breaking her word to the Beast to look for a tree in the Black Forest. A reluctant Fife is sent after her. After his discovery, he causes the ice to crack. Lumiere, Cogsworth, and Chip attempt to save her, but Beast, alerted to her position by his magic mirror and Forte’s lie that she abandoned him, rescues her. The tree is lost under the water.

Beast sentences Belle to spend the rest of her life in the dungeon as punishment for breaking her promise to never leave the castle. The rest of the staff and a remorseful Fife visit her. Even Angelique realizes that she was wrong about Christmas being hopeless as everyone decides they don’t need a tree, decorations, or food to have a Merry Christmas.

Forte encourages Beast to destroy the enchanted rose and end his torment. As he is about to do so, he finds his present from Belle. Opening it, he finds the storybook she made for him. The story inside is about him and the rest of the castle celebrating Christmas and that they shared the greatest gift of all: hope. Beast realizes that there is hope after all and releases Belle from the dungeon.

Forte however refuses to fade into the background and plays Beethoven’s Fifth in an attempt to literally “bring the house down” and kill everyone inside. Fife confronts Forte and discovers that the pages to his solo were blank all along. Beast, Belle, and the others escape the dungeon to confront Forte. Fife directs Beast to destroy the keyboard. Beast rips the keyboard away from the organ, silencing the music, then throws it aside, destroying it. Forte unwittingly frees himself from the wall and he collapses, dead. During the chaos, the enchanted rose is nearly destroyed, but Lumiere and Cogsworth save it. 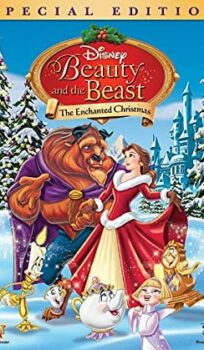