Daphne (Diane Keaton) puts out an ad and interviews men for her daughter Milly (Mandy Moore), finally settling on Jason (Tom Everett Scott). Jason meets Milly (who does not know about the ad) and they start dating. Single father Johnny (Gabriel Macht) does not pass the test when he chats with Daphne (he does not know about the ad), but he gets Milly’s business card and meets her and they also begin dating.

When Milly finds out about the ad, she breaks up with Jason who she was only dating because he was the type of person Daphne would approve of. She and her mother stop talking. Johnny breaks up with her when he realizes she has been dating someone else the whole time. Daphne meanwhile begins a relationship with Johnny’s father Joe (Stephen Collins).

In the end, mother and daughter make up, as do Johnny and Milly, and Joe and Daphne get married. 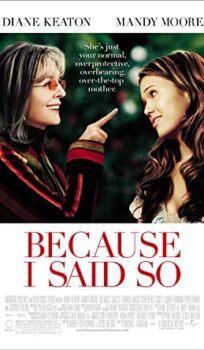