SHORT VERSION
The re-animated army successfully drives the Nazis out of England, but they destroy all of Miss Price’s spells. The three orphans remain with Miss Price, while Mr. Browne decides to enlist in the English army.

LONG VERSION
Set in a coastal English village during WWII, 3 orphans have been evacuated from London and are placed in the home of Miss Eglantine Price (Angela Lansbury), a local spinster who is also an apprentice witch. After the children catch Miss Price flying on her broomstick, they threaten to reveal her secret unless she gives them something of value. She decides to teach them a traveling spell, which she places on a bedknob from an old bed. By telling the bedknob their desired location, the bed will magically travel to that location. When the final lesson for Miss Price’s witchcraft course fails to arrive from London, she and the kids travel on the bed to London to find her professor and demand that lesson.

When they arrive in London, they find her professor, Emelius Browne (David Tomlinson), who turns out to be a street magician and con man. He tells Miss Price that his witchcraft course was a scam, and he took the spells from an old book called “The Spells of Astaroth”. When he realizes that the spells actually work, the 5 of them proceed to look for the one missing spell from the book (the page was torn out). That spell is later revealed to be on an amulet once worn by the real Astaroth, and it is now on the Isle of Naboombu. Everyone gets on the bed and travels to Naboombu.

The island is inhabited by animated characters, and the island’s king quickly recruits Mr. Browne to be a referee for a soccer match. The king is wearing the amulet the entire match, and Mr. Browne tries to get the amulet, but fails. After the match, he successfully pulls off a “gypsy switch”, substituting the amulet for the referee’s whistle, and the 5 run back to the bed and quickly return home. Once home, the spell on the amulet is revealed to be a spell that brings inanimate objects to life. Miss Price tells everyone this is the spell she really wants to learn because she believes she can use it against the Nazis should they invade England.

Despite a blossoming relationship developing with Miss Price, Mr. Browne says he has to return to London. While waiting at the train station, he sees a Nazi U-boat off the coast and an invasion has begun. He tries to go to town to get help, but the Nazis see him and chase him away. Meanwhile, Miss Price and the children have been captured and are sent to the local museum while her home is used as the staging area for the invasion. At the museum, Miss Price, the children, and a just arrived Mr. Browne decide to use the spell they just learned to bring all of the museum’s contents to life, which include suits of armor, viking outfits, and other soldier’s uniforms and weapons.

Led on broomstick by Miss Price, the re-animated army attacks the Nazis, driving them back to their U-boat. However, they blow up part of Miss Price’s house, which knocks her off her broomstick and un-animates the army. Just then, the English army arrives and takes credit for the victory. The blast destroyed all of her spells, and she decides that she doesn’t want to be a witch anymore; she wants to be the mother the three kids want her to be. At the end, Mr. Browne enlists in the English army, and kisses Miss Price good-bye. He also tells the kids that he will be their father once he returns home. 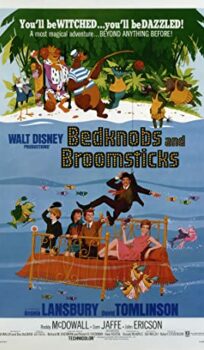