Otho (Glenn Shadix), along with Lydia’s (Winona Ryder) parents Charles (Jeffrey Jones) and Delia (Catherine O’Hara), and Bernard (Dick Cavett) and Grace (Susan Kellerman), get the wedding clothes of Adam (Alec Baldwin) and Barbara (Geena Davis) Maitland, and through their Handbook for the Recently Deceased hold a séance and summon them. However, their ghost forms begin to rapidly age and they start to die.

Lydia goes to Adam’s model of the town where Beetlejuice (Michael Keaton) is and asks for his help. He said he could help them, but before he does, he tells her that he wants out of the dead life for good, and in order to do that, he needed to get married, and she’ll need to be the one to marry him. She hastily agrees to the deal and summons him. Beetlejuice sends Bernard, Grace, and Otho packing, and saves Adam and Barbara. But, as per the agreement, Beetlejuice holds an on-the-spot wedding ceremony.

Lydia tries to send Beetlejuice away by calling his name three times, but is stopped. Adam and Barbara try to help, but Adam is shrunk and sent to the model town and Barbara is sent to Saturn, the land of the sand worms. Adam jumps into a toy car and drives it off the model into Beetlejuice’s foot before the preacher can pronounce him and Lydia husband and wife, and Barbara rides a sand worm in through the roof, which comes down with an open mouth on Beetlejuice and sends him through the floor.

The Maitlands and Lydia’s family learn to co-exist with one another, and the Maitlands begin to renovate their home back to the way it was before Delia became artsy with it. Lydia comes home from school one day with an A on a recent math test, and as a reward from Adam & Barbara is allowed to levitate in the air while singing “Jump In The Line.” Beetlejuice is shown in the afterlife’s receptionist’s office, where, after tricking a witch doctor out of his number for service, has his head shrunk by him. 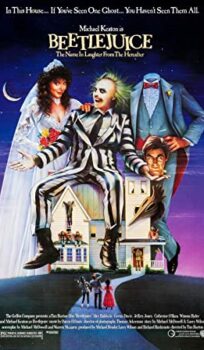