Before the Devil Knows You’re Dead(2007)

Hank (Hawke) and Andy’s (Hoffman) mother is in a coma after being shot in the robbery – she also kills the thug brought in by Hank to commit the robbery. Her husband decides to pull the plug since the doctors basically promise she won’t make it.

Gina, Andy’s wife who’s been cheating on him with Hank, comes clean and walks out on Andy just as the noose is tightening.

The robbery thug’s wife’s brother finds Hank and blackmails him.. Hank of course doesn’t have any money, so he turns to Andy, whose embezzlement from his work is being discovered. Andy takes them to his drug dealer’s apartment where Andy murders the dealer and a passed out client before robbing the place of tons of money and drugs. They head over to the thug’s brother-in-law’s to pay up but Andy instead shoots him and is about to shoot the thug’s widow when Hank says he’ll have to shoot him first. Andy turns the gun on him and tells Hank he knows about Hank and Gina and that maybe he should shoot him. Hank asks him to and Andy is about to but he’s shot by the woman who then screams at Hank to leave. He does, leaving her some money but taking the rest and running away.

Meanwhile, Charles, their dad, has found out that Andy was behind the robbery (but he doesn’t know that Hank was there) and while Andy is in the hospital recovering from his wound, Charles suffocates him. 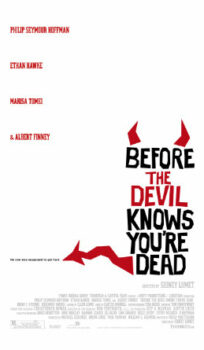