Shep (James Stewart) manages to break Gillian’s (Kim Novak’s) love spell, and return to his former fiancée Merle (Janice Rule). Weeks later, Piwacket the cat makes an unexpected appearance at his office, so he returns the cat to Gillian’s shop. Once there, he realizes that even without a witch’s spell, he has “legitimately” fallen in love with her, and that Gillian loves him as well (and has lost her powers because of it). 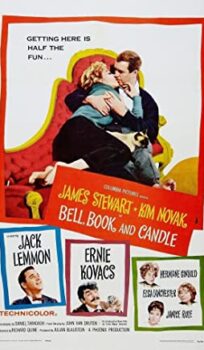