The Perfect Word
Webster, Crane, and Le Plume forge a letter of apology from Beast to Belle. Mrs. Pottes learns of their plan but keeps silent. Belle reads the letter and apologizes to the confused but grateful Beast. All is well until that evening when Cogsworth praises the letter and Beast grows suspicious.

Belle shows him the letter, but Beast knows it is a forgery. Concerned about their relationship, Mrs. Pottes urges Webster, Crane, and Le Plume to confess the truth. When they do, Beast banishes them from the castle.

Belle and Mrs. Pottes blame themselves for the trio’s plight. Belle goes out to find them outside the castle. She apologizes to them and convinces them to come inside, assuring them that Beast won’t hurt them because “deep down, he has a good heart”. Overhearing this, Beast softens his heart and confronts Belle, only to apologize for his behavior. Lumiere and Chandeliera forgive each other as well.

Fifi’s Folly
Fifi finally discovers the truth that Lumiere was never having an affair with Belle and that the two were working together to plan their anniversary date together. After the serenade and the moonlit walk, they go for a sleigh ride. Fifi is nervous because she had partially cut the rope earlier hoping to sabotage the sleigh ride she thought was for Lumiere and Belle. The rope breaks, sending the runaway sleigh on a wild ride which eventually falls off the castle ground and into the surrounding chasm, luckily the sleigh is caught on a lone branch. Lumiere’s written speech which declares his feeling for Fifi blows away, forcing him to declare his love from his own heart. Belle, Mrs. Pottes, Cogsworth, and several other castle staff members save them just as the branch breaks. Lumiere laments that the anniversary was far from perfect, but Fifi declares that it has been a night she will always remember.

Broken Wing
Beast confronts Belle about being late for lunch, only to find out she has been taking care of an injured bird all along. In a jealous rage, he tries to chase the bird out of the castle, but slips and falls down the stairs, hitting his head on the floor. Coming to, he hears the bird singing and is intrigued. Declaring that the bird must never leave the castle, Beast locks it up in a cage despite Belle’s protests. The bird however refuses to sing. Belle tells Beast that the bird will only sing if happy and asks how he would feel to be locked in a cage. Later, seeing Belle outside and miserable, Beast, knowing that she is still his prisoner, finally realizes the meaning of her words and decides to grant the bird its freedom.

Meanwhile, Cogsworth becomes a tyrant in controlling the rest of the staff and everyone is miserable. He follows Beast up to the West Wing where he sees Beast remove the bird’s splint and allows it to fly free. The bird is still too weak however and it falls to a balcony below. Beast hurries to save him. Cogsworth falls off the balcony, but saves himself with a piece of the Beast’s torn cape. He apologizes to everyone he mistreated below and falls, but the others save him as a sign of forgiveness. The bird flys free and away from the castle.

Later, while having lunch with Belle, Beast finds the bird outside, having come back to the castle with a mate.

(The 2002 DVD special comes with an extra story that starts after Fifi’s Folly.)
Mrs. Pottes’ Party
With all the flowers in Beast’s room to hide their purpose from Mrs. Pottes and the pages for Cogsworth’s music symphony destroyed, the rivalry between Lumiere and Cogsworth reaches its peak when they try to make their cakes larger than the other. During baking however, the cakes explode, making a huge mess in the kitchen. Angry at his masterpiece being destroyed by sabateurs, Chef Bouche declares that there will be no cake. Chip laments on no cake for his mother’s party despite Mrs. Pottes being behind him. Mrs. Pottes now feels worse than ever before.

Feeling guilty for what they’ve done, together with Tres and Chaude, Lumiere and Cogsworth apologize to Chef Bouche and they surprise Mrs. Pottes’ with music and a new cake. The sun finally shines outside, but Mrs. Pottes declares that she already feels better because everyone worked together rather than against each other.

Beast finally wakes up from his nap, only to find the flowers all around him and promptly sneezes. 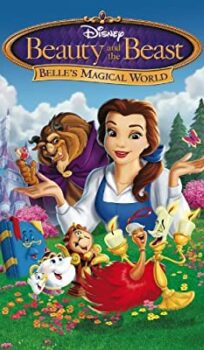