In order to rescue the family dog Ponce, Ben (Lucas Hedges) reacquaints with his former “boss”, local drug lord Clayton (Michael Esper) and offers to pay him back; yet, Clayton demands from him to do one last drug run as a condition to give back the pet, which he reluctantly does. Meanwhile, his mother Holly (Julia Roberts), madly scrambling around to try and find her son, comes by grieving Maggie’s mom, Beth (Rachel Bay Jones), for help; Beth provides her with a Naloxone kit to revive Ben in case of an overdose, as well as her own car and keys so she can drive off to find Ben.

As part of her search, she comes across “Spider” (David Zaldivar) and gets him to inform where Ben could be, in exchange for the pack of drugs she took from Ben earlier. She also comes by a pharmacy where she tries to refill an anti-overdose prescription, only to be turned down by the Pharmacist (although that same Pharmacist later gives Ben a syringe, in a hypocritical twist) for “encouraging that kind of bad behaviour”

Ben recovers the dog, but also gets a little pack of dope as payment from Clayton; then, he drives towards an abandoned barn, locks Ponce in the car, leaves a note directing anyone who sees it to call Holly and walks off, seemingly to shoot up. Holly, feeling defeated, tearfully calls her husband Neal (Courtney B. Vance) and opens up to him about her feeling of despair; then, she goes to a Police Station where she begs that Ben is arrested. At that moment, however, she gets a phone call from a man who saw Ben’s note.

Upon arrival, she releases Ponce and he leads her to the barn, where she finds a visibly overdosed Ben. She uses the Naloxone kit and struggles to do mouth-to-mouth on her son. She gets to revive him and he slowly comes out of it as the movie ends. 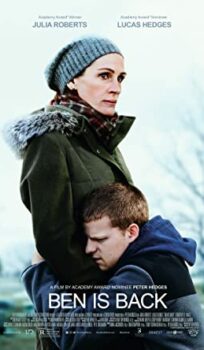